If like me you can remember the early floppy disc  long before hard discs  then a MB was a great deal of space, early hard drives were a few MB, now we talk is hundreds of GB and so on till we arrive at the TB an even larger measure. 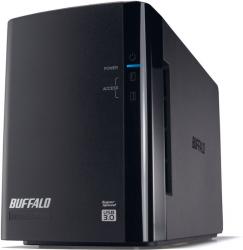 The DriveStation Duo is - as it rather gives away in the title – two drives in a single case. In my case they were two 1TB drives. You could purchase larger drives and it’s to you which sort of array you set them up into.

The box is 21.5x12.5x8.5cm without the cables inserted in the rear and it weights a not insubstantial 1.91kilos.

The front cover pulls off to reveal the two drives that just slide in and out of the drive bays. The back of the cover displays the various combinations of the three LEDs which can be red, green orange or flashing according to what is being done. These are shown just to the right of the front panel about 2/3 of the way up the edge.

The rear of the unit has an on/off slider top left with a small Raid push button just below it. To the right of this is the fan discharge and below this a Kensington lock socket. Back to the left side the USB3 cable input and finally below this the DC input. The base has four 1,5cm square slightly sticky feet that give the unit good desk contact.

While this is a USB3 drive unit it will work with a PC that has only USB2 drives but of course only at a slower speed.

To be precise this is eSATA and USB3 mounted in a case that uses a USB3 port to transfer the data to and from the PC.

The actual transfer rate will depend on a lot of factors which include the size of the files being transferred, but in theory anyway up to 225MB/s should be possible. However the actual rate will of course vary a good deal.

A few words on the speed difference between USB2 and USB3 – again these are possible figures – of up to ten times faster with USB3 over USB2. The stated actual figures are up to 5Gbps USB3 and 480Mbps using USB2.

The drive will shutdown at the same time as your PC using the ‘Power Saving’ mode. You get a two year warranty.

You get several software packages including RAMDISC and Backup utilities as well as Turbo PC and Turbo Copy. The back of the box gives an example of transferring 1,000 digital photos with USB3 and both Turbo PC and Turbo Copy of 8.4seconds, USB alone of 16.5seconds and USB2 of 37.4seconds. Once the software is installed it loads at start up and is on a pull out either at the left or right side of the screen.

The software all comes on a single CD along with the user guide. There should have been a printed Quick Setup Guide but this had vanished before it arrived with me, however it is really just plug in the DC adapter and then the USB lead, no drivers are required, Windows finds it and assigns a drive letter and you just drag and drop.

Of course you need to RTFM to understand how to setup the RAID as you want and also to use the various utilities.

Doing my Internet searches found the Buffalo DriveStation Duo 2TB at £183.71 from the first link below. It will also be available in 4TB and 6TB options at higher prices.

I found the Buffalo DriveStation Duo 2TB at $249.68 from the first link below. It will also be available in 4TB and 6TB options at higher prices.