If the Windows solitaire offerings just do not cut it for you then there are lots of places willing to sell you a game or three on the Internet. Here however you can play (with no limits) 1000 different Solitaire games for less than a tenner.

Available direct from Avanquest
Only £9.99 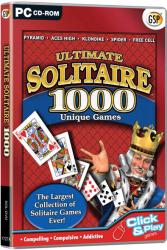 In the space available to me here I could not even list all the available games. However providing 1000 games is not all it does, it even allows you to create your own unique game and for those who care there are even more than 80 different card backs provided and if that is not enough you can even import your own images.

Installation is from a CD and for me took around five minutes and used 656MB of hard disc space, it creates a desktop shortcut. No reboot was required and on first opening of the package you have to create a player name choose a table background – I found 98 some rather weird – and then select your favourite playing card back.

It is then suggested you hit the New Game choice and from there you can select any of the 1000 games and start playing.

On selecting New Game you have a Window with two columns, Group and Name. Regular readers will know I am a very keen Freecell player and selecting that from ‘Group’ was surprised to find 13 different games with the same basic object. However you will probably need to consult each games rules to find out how to play the various variants.

There are a total of 21 entries under ‘Group’ and these include both hard and easy as groups. So when you highlight easy you get 34 games under name. Highlight hard and you get 58 different games. New Games has over 250 titles.

Create Game is perhaps something that you need to practice using as otherwise someone else would probably have already created it. You are only creating a variant of four games, Klondike, Spider, Fan and Canfield. The whole game is created on a single screen by ticking boxes or entering numbers.

There are eight areas, Game Type (choice of four as stated), Decks 1-4, Cards number of Tableaus, Number of Foundations, Reserves, Fans and Face Up, not all numbers need to be filled in. Stock Options Choice of five). Foundation Rules Choice of Five. Tableau Rules choice of six, Move Rules choice of six and finally Empty Pile choice of five. You can name and create a game in minutes but I doubt it will be a lot of fun to play.

Game Preferences are worth a mention it consists of four tick (or not) boxes. Animate Cards, Statistics Recording, Undo’s Allowed and Card Sounds.

Given that there are 1000 games the layout of the table is somewhat fixed and if for instance all cards are shown then the space for unused cards is vacant and looks rather strange being there. On my 15inch review machine it opens a 10inch Window and all looks fine however should you increase it to full screen clarity and sharpness declines.

However when they supply 1000 games for £9.99 that means less than 1p per game even without the ability to design unlimited games of your own. I feel if you find just two games you enjoy the price is in no way excessive.

Available from dealers or direct from the link below and on the site there are numerous other games worth a look.