Just as Vistas troubled life comes towards its end comes a notebook that runs well with it, also a notebook that gives a full eight hours of use. Put the two together and you have the Packard Bell Butterfly. 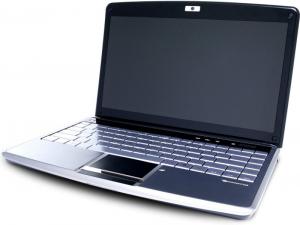 The new Packard Bell Butterfly measures 32x22x3cm and weights 1.8kilos. It is shiny black and grey (don’t know any Butterflies of that colouration), open the lid and the grey is the keyboard surround while the screen surround is the shiny black.

It has an 87key keyboard with all but the function keys full size. Strangely the trackpad is mounted in the centre of the area in front of the keyboard most seem to favour an area slightly left of centre. The area behind the keyboard has the on/off switch, the speakers and four LED’s. Unsurprisingly the battery does jut out a bit but the screen rotates over it. The top of the screen has a webcam built into the surround. I found that the shiny part of the lid and indeed the screen surround soon looked dirty with finger marks whereas the matt grey areas did not.

The left side has DC input, VGA output, a USB port and headphone and microphone sockets. The front has a bar orange LED to show charging. The right side has card slot, two USB ports, HDMI port, Ethernet port and Kensington lock connection. I am told the unit will ship with an external ODD but mine did not have one.

Before installing Norton (no choice as it sits on the desktop taking most of the space and you cannot close it) bootup was around a minute and shutdown was 12 seconds. After Norton it was exactly the same, so even though I am not a Norton fan somehow the normal huge increase in booting and shutting down has been overcome, maybe Norton has learned to be leaner or maybe Packard Bell have integrated it better either way the Norton Internet Security works well on this notebook.

The other software provided is a Trial of Microsoft Office and a full copy of Microsoft Works 9. Also on the notebook are Adobe Photoshop and Premier Elements 6. A kid’s thing called Magic Desktop and a small neat VLC media player. The operating system is Windows Vista Home Premium.

This is the first notebook that I have reviewed where Vista seems responsive and works as no doubt Microsoft intended, the shame is that by the time you read this Windows 7 will be the operating system it comes with, mind you my tests with Windows 7 have it as a far better and well resource hungry system so I suspect it will really fly.

I doubt you would buy this 13.3inch unit for Gaming as the windows Experience score is 3.2 for graphics, 3.3 for gaming graphics, 3.5 for processor, 4.9 for memory and 5.6 for hard disc. In this case I feel the unit is better than the 3.2 overall score providing you are not expecting great gaming performance.

The processor is Intel Centrino 1.4GHz, it has 4GB of Ram and my unit has a 220GB hard disc.

On the face of it this is less powerful than a Netbook it does have a great screen resolution of 1366x768 and perhaps saving the best till last, the battery gives a true eight hours of battery life. Yes that is eight hours of screen (undimmed) using what is termed as ‘balanced’ screen brightness and in that time there was some Internet use and some use with external USB devices. I would describe the eight hours use as constant. Recharge from fully exhausted (with notebook off) is 220minutes.

I did run it continuously and got 8 hours and 20 minutes (adjusting for the final 10% where it will shutdown almost at will) and 7 hours and 58 minutes with use in hour and half hour segments with the notebook switched off at the end of each usage period. So there were 12 switch ons and 11 switch offs during the latter test so I cannot fault the Packard Bell claim of 8 hours of battery life. The ‘balanced’ screen brightness is not likely to harm anyone’s eyesight something I cannot say for some other manufacturer’s claims.

Doing my Internet searches found the Packard Bell Butterfly at a best price of £699.99 including free delivery from the first link below. I also note that the unit ships with a 500GB hard disc and not the 220GB unit in my review system.

The Packard Bell Butterfly is available for €565,76 including delivery from Amazon France on the following link: