Viewsonic All In One

Not as you may think a printer/scanner/copier but a PC that is built into a flat panel. It comes complete with corded keyboard and mouse. Viewsonic are best known for monitors/flat panels and of course the latter is heart of this unit. 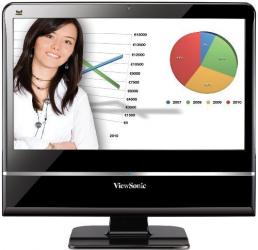 The screen is 44x37x4cm it is raised 5cm off whatever you stand it on by the base that is 22x17cm. The whole PC is located inside the 19inch screen. The only extras are the keyboard and mouse both are black to match the screen. The screen weights a little under 5.4kilos.

It uses the same processor as the range of Netbooks but the screen resolution is better at 1366x768. So its Windows XP Home and 1GB of Ram and a 2.5inch hard drive stated to be 160GB and this is normal Netbook fair. Of course Netbooks do not have a built in optical drive but this Viewsonic offering has a built in Super Multi DVD/CD unit in the side of the panel.

The other external connections are USB 2.0 (x4), PS/2 (x2), RJ45 Gigabit Ethernet LAN, Microphone jack, Earphone jack, 4-in-1 card reader (XD, SD, MMC, MS) and of course there is built in Wireless for those who dislike trailing cables.

The right side has the DVD drive, two USB ports and the multi card reader. The back has power input on the left of the back the other connections two USB, two PS/2, microphone and earphone and the Ethernet port are in a group on the right of the back.

The screen surround has built in speakers and there is a 1.3mega pixel Web Cam built into the centre top above the screen.

For anyone with simple uses this is a useful unit. Once you have an Internet connection you need very little. A lot of people hate the trackpad on Notebooks and Netbooks and Viewsonic provide a perfectly adequate 10x5x3cm optical three button mouse with a 1.4metre lead to PS/2. A 102 key keyboard - the alpha and numeric keys are fullsize - there are an additional six buttons down the right side to control audio and six buttons along the top for web browsing, it also has a 1.4metre lead to PS/2. Given that the keyboard is 42x15x2.5cm it is very compact, both the keyboard and mouse are black (labelled Viewsonic) to match the screen colour.

The average power consumption is stated at 60watts, with power being a hot topic its good to see things like that mentioned in the specifications.

As with most units that come in these days after securing it with the supplied Trend Micro Anti Virus software I connected to the Internet and soon I was doing no less than 34 Windows updates - it survived - and not I was able to do some useful work. While I am not a fan of the multitude of ‘free’ 60 and 90 day trials if this unit is to be sold it could well be the Silver Surfer market and these need protection.

I felt it my duty to watch several DVD’s and these displayed very well on the 18.5inch viewable screen, clear and crisp as you would expect from a company that until now has been known for its monitors and panels.

If someone wants a static PC then this could be the answer, Microsoft are making it a lot harder to purchase a PC with Windows XP only allowing it for the Atom chip (used mainly in Netbooks) View Sonic have implemented it into this unit and it gives a larger screen (and viewable area) and a full size keyboard and mouse again making this suitable for the less dexterous among us. Put it in place and use it, certainly this would work here.

While the price is not cheap compared to some other offerings everything is in the box apart perhaps from a basic word processor and spreadsheet package. Average boot time is 40seconds and shutdown is 25seconds.

Doing my Internet searches found the Viewsonic VPC100 at a best price of £414 including free delivery from the first link below. The second link has several videos on the unit.

Looks excellent, if i was buying one at this time this would be my first choice