Providing a break from actual game playing, the next two offerings contain a pictorial reference to a time when death was but an assassins blade away. 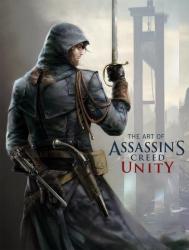 Throughout time conflicts have arisen between specific groups for reasons often shrouded in mystery.  Take for instance the conflict between the Brotherhood of Assassins and the Knights of the Templars which forms the basis for a series of Assassin’s Creed titles that currently consists of more than eight main games and a number of support material offerings available for the main gaming platforms.  This historical fiction action adventure open world stealth game series, published by Ubisoft, currently stands at over 73 million copies.  To this list of Assassin’s Creed titles can now be added two coffee table books published by Titan Books.

Both of these offerings from Titan Books are based on the latest chapter in the Assassin’s Creed series which is set in Paris during 1789.  This is the Paris of the French Revolution and the ideal setting for Assassin’s Creed Unity where life is cheap and danger lurks behind every corner.

First up is The Art of Assassin’s Creed Unity which is the work of Paul Davies.  Having worked in gaming journalism for twenty years, Davies has edited magazines and websites plus having the time to be the co-founder of the media agency Unlikely Hero Ltd.  He is the author of several art books including The Art of Assassin’s Creed: Black Flag™ which tends to indicate he is a fan of this game series.

This full colour glossy book of over 190 pages sets out to create a pictorial representation of the French Revolution as seen through the eyes of the development team behind the latest offering in the Assassin’s Creed series.  The book opens with a forward penned by Mohamed Gambouz (Art Director at Studio Montreal).  He stresses the concept of combining Hope, Chaos, Ageing and Richness in an environment where photo-realism and stylisation blend with each other for a visual gaming experience the player is hardly likely to forget.  As a result this book takes you on a trip around a city during a period when life was cheap as the masses rise up against the excesses of the privileged few.

The book divides its content into ten chapters starting with Arno Dorian who was orphaned at the age of eight and later fought hard to be initiated into the Brotherhood of Assassins.  He is the lead character of this game.  You can check out his wardrobe made up of various costumes, weapons and even his villa located on ST. Louis Island in the River Seine.

The book’s second chapter deals with Allies and Enemies with some characters that possibly take their inspiration from historical figures of the period including the Infamous Marquis Donatien Alphonse Francois de Sade along with Maximilien Robespierre and the lesser-known Charles Gabriel Sivert.

But Paris being Paris, it would be sacrilege not to visit some of the city’s sights even if it was just to track down victims for your Assassin’s blade.  With this book you get to see the Palace of Versailles before and after being redecorated by the mob.  Visiting the Ile de la Cité takes in the Sainte-Chapelle and Notre Dame while the Ventre de Paris offers a complete contrast with “The Belly of Paris” being ruled by the King of Beggars.  Other areas covered by this book include the Bastille, Le Louvre and the Paris catacombs.

If nothing else then this book relates the amount of often unseen work that goes into the development of a modern video game.  Some of the scenes depicted in this book are incredible detailed and evoke the atmosphere of that period.  The Art of Assassin’s Creed Unity is priced at £29.99.

With the rather mouthful of a title, Assassin’s Creed Unity: Abstergo Entertainment: Employee Handbook takes a completely different approach to this latest game in this immersive stealth series.  The book’s author, Christie Golden, who has written over 35 novels with sales of over a million copies, has based this latest composition as if it was a set of Abstergo case files.  In case you are wondering, Abstergo is a fictional company that provides the research that enables characters to inhabit the lives of their ancestors.

Opening with a letter from Abstergo’s CEO, the book contains research carried out by a previous company analyst regarding Arno Dorian, the central character of Assassin’s Creed Unity.  This research was not considered up to the standard normally associated with Abstergo.  As a result you are charged with examining the data and then completing the assignment.  This is a bit like a game that is not a game if that makes any sense.

This Employee Handbook contains sections, divided by inserts as you would expect in a file folder, dealing with a welcome to Abstergo and various topics of information regarding the subject matter of Arno Dorian.  The content contains a mixture of full coloured images, notes, loose-leaf documents and other items that might easily be lost if you are not careful.

I found the style and layout of this book to be rather off-putting.  I much preferred the more straightforward approach adopted by the Art series offering.  The 152pp Assassin’s Creed Unity: Abstergo Entertainment: Employee Handbook is priced at £29.99 and is aimed at hard-core fans of the game series.