This is a Blu-ray player and a sound system, Pioneer call it the BCS-SB626. The Blu-ray has some extra features including 3D. The 2.1 system includes a meaty sub woofer and a sound bar to sit in front of your TV. 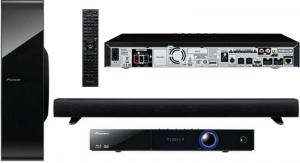 While I suspect that you could put a sound bar and a Blu-ray combination together for a smaller part of the price I doubt that the sound quality would be as good. Often people rave about large cinema systems and if you have the room and can hide the multitude of cables then you can have a similar experience to that of a cinema.

While TV has improved out of all proportion to even say ten years ago a sound bar offers much more, link it with a sub woofer and you are getting something even more. Play a Blu-ray or DVD through a TV and while the picture quality is great sound is rather disappointing and in most cases far lower than that when watching TV.

I first played a DVD using just the Blu-ray player and an HDMI lead and used the TV sound. After a few minutes I ramped the volume or should I say I tried to, even at maximum there was little more and the quieter sections had to be guessed at.

Connect the sound bar and the sub woofer and there is plenty of  - possibly even too much - volume and it had me reaching for a music Blu-ray. This was one of favourites that I have had since a very early Blu-ray player when HDMI was still very new. To say that I heard new things is an understatement far closer to a live performance than you can get otherwise.

The Blu-ray unit is 42.5x32x5cm but add another 5cm to the middle figure to allow cables to be plugged into the rear. The rear connections are 3xHDMI (two in, one out), Composite out, Optical Digital in (two), FM aerial socket (lead supplied), Ethernet, (if can also have wi-fi), Speakers out (Left, Right and Sub Woofer), iPod dock port and an Adapter socket. The front has two USB2 ports, microphone input and another 3.5mm input all behind a drop down door. I never tried the Karaoke feature although I have a microphone that would have fitted as my neighbours and I get on and if I sung we may not.

The remote supplied has 66 buttons and this seems to have buttons for certain features that apply to different models, certainly more than I managed to tie up during my review.

The sound bar is 80x8x5.5cm the last figure the depth is at the front the rear is only 4cm, it needs no external power. This has a pair of colour coded plugs that fit into the Blu-ray player and the leads are hard wired and 3 metres long.

The sub woofer is 38cm deep, 42cm tall and 11cm wide, it has a 3metre long hard wired lead to the Blu-ray player and like the speakers needs no external power.

Some of the other items playable include anything connected by one of the two HDMI in ports, anything Bluetooth via adapter, the FM radio – this sounds superb -, iPod via the supplied dock and if you have one that plays video, a cable is supplied to output this as well. It can also play your CD’s as well or course as MP3 via USB.

So the Blu-ray box is an amplifier for the 2.1 system and the volume control is on the remote. While there are a line of six touch buttons on top of the Blu-ray player at the front edge these do not include volume so do not lose the remote.

Just in case the output from the Blu-ray was got at in some way I connected my own basic Blu-ray player to the TV via HDMI and played the same film I started with and the volume output even at maximum was as bad as the Pioneer unit just using the HDMI cable, so if nothing else to hear the dialog clearly this kit will do it.

The Pioneer BCS-SB626 system offers 590 watts output. The six speakers in the speaker bar are 340 watts and the sub woofer 250 watts. It is available from the link below for £269.99 with free delivery.