I certainly remember a radio that had this retro look many years ago; of course it was not DAB. In fact the View Quest Retro DAB radio has most modern controls, easily implemented and of course it has an iPod/iPhone dock but it just has the retro look. 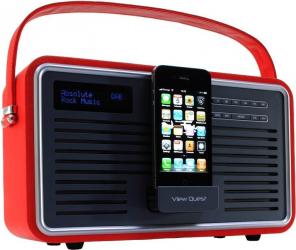 The maximum dimensions for the View Quest Retro DAB radio are 29x17x9cm this assumes you have the unit powered by mains as this adds 3cm to the depth.

My unit was red with a leather like fabric covering all but the front and the back with the carry handle in the same finish.

All the controls and connections are on the back and front. The back has the battery bay, the 66cm seven piece rod aerial, on/off slider, Auxiliary in and DC in sockets.

The front has a two line 6.1.5cm 16 character per line display, this is white on grey. The front right has eleven buttons in two rows to control the unit. Finally the iPod/iPhone dock is near the base in the centre of the unit.

There is a twelve page manual that explains everything and has one diagram to show where most of the controls are.

I suspect the lettering on the buttons will be enough for most to get tuned in and do most actions. For more involved actions such as setting sleep and alarm timers and Presets you will probably need to read the Instruction Manual.

I moved this around the house and was interested that even without batteries the clock displayed the correct time as soon as power was applied so there must be some form of power store within the unit to give this information.

On the subject of power the lead at 1.4metres is too short. Beside my bed I had to add an extension lead to reach the socket that is on the other side of the bed. In fact anywhere that has skirting board sockets the lead is likely to be too short, it needs at least another metre to allow careful placement of the unit in an area to suit.

At night I found the lack of a dim control on the two line display rather annoying as I found the default rather bright.

I liked the controls easy to use and placement even by touch was not difficult to master. The one larger button (in the centre of five) on the second row is the all important snooze button.

There are ten presets for FM and another ten for DAB. On first turn on a scan takes place for DAB and it found the stations quickly. For FM you can move .5MHz per press or use the second button on the top line for tune to next station automatically. I found that on my unit setting presets was not always as easy it should be.

Setting alarms or sleep timer can be made either in standby mode or while the radio is on (in either FM or DAB) mode. This is just a case of following the screen display and pressing the fifth button on the top line when your choice is the one shown. You can set up to two different alarms and one choice from five times for the sleep timer.

The iPod worked without problem and of course it will be charged while mains power is attached. The Auxiliary input also gave access for those using a MP3 player as their player of choice.

The main bugbears are the short mains lead and the dodgy Preset selection process; I liked the layout of the buttons. The overall look was fine Retro but also up to date.

Doing my Internet searches found the View Quest at £99.99

A review of an audio device, with no mention of the audio.  Hmmm...