A rather nice 32inch LCD HD Ready TV from Sharp. Considering what even a small flat panel of a few years ago used to weigh, this even with its stand is light. However when you remove it from its box without the stand fixed its very light. 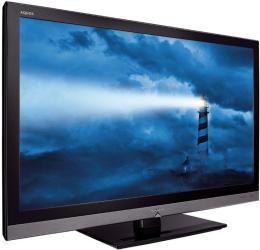 Without the stand it is 76x50x10cm (max), the stand lifts it a few centimetres above whatever it is sitting on. The stand is 38x28cm.

The importance of the remote control is perhaps best stated by the fact that page three of the Operation Manual describes it before it even mentions the TV. In fact the only times I go to the TV is to turn it on/off using the flip button on the left edge or to connect or remove a cable for some external device that is connected to it.

Once you have connected your aerial and plugged the unit into the mains you delve down the menu mode on the remote control to find the setup menu and do the Autotune this produces a few less channels than other recent TVs simply because some channels have been removed in the run up to HD over Freeview for later in the year.

I got 77 TV and Teletext channels and 23 Radio channels. However this tune will also find whatever Analogue channels are available. In my case this was five, that might sound correct but as this did not include the Analogue channel five (always a poor signal) I needed to do another scan to get it to lock it in, it also allowed me to get the normal BBC1, BBC2, ITV, Channel 4, Channel 5 and Video Recorder order. However the only normal way when watching Analogue to change channels is by the program up/down button meaning you have to go from BBC1 to Video Recorder through the other four channels as they are listed as channels 901 to 906, unless you remember to input 904 say on the keypad if you require Channel 4 TV.

The remote has 44 visible keys and another 9 under a slide up lid but apart from the sleep key the other 8 refer to Aquos link operations that apply mainly to extra equipment, all described adequately in the Operations Manual.

If the dog buries the remote control basic actions can be completed using the seven buttons on the lower part of the right edge of the TV. The left edge has an HDMI socket, Composite sockets and a 3.5mm headphone jack. The rear has all the other connectors towards the right side of the back, two further HDMI sockets, VGA socket should you wish to connect a PC, Digital, two SCART sockets and the Component sockets. The exception is the power input that is towards the left side of the back of the unit, quite unusually this is not hard wired.

When watching Digital there is a program guide that by default shows all the programs in a vertical line for the channel you are watching. Certainly other EPG give a lot more information for a lot more channels immediately.

Quiet often I find the sound volume between Analogue and Digital TV is annoyingly large (digital being lower) as it is here, however for some strange reason Analogue and my PVR seem to have around the same level with the units Digital TV being a lot lower. In fact whatever external devices including those connected by HDMI all seem to have a common level with Analogue only the Digital TV channels need a large ramp up of volume.

Picture quality was fine with a good range of contrast and brightness available and plenty of colour style choices. Blacks are good and when viewed in a poorly lit room the edge of the image is not definable from the screen even when there are bars on the viewed image.

Doing my Internet searches found the Sharp LC-32LE600E at a best price of £549.50 from the first link below.