Music on the Move

As a personal mobile device, it makes sense to use your iPod for your in-car music entertainment when making a road trip. 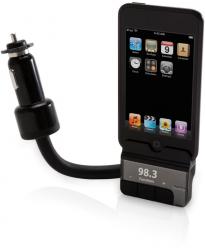 Although not exclusively so, the vast majority of products available from Griffin Technology have been designed with the Apple Mac and iPod in mind.  One such product is the RoadTrip.  As you might suppose from its title, the RoadTrip is an in-car device that could help when you need to make long distant journeys.  The RoadTrip designated task is to send music from your iPod or iPhone to your car’s stereo FM radio kit.

Opening the box reveals the main RoadTrip device, various dock adaptors and a multi-lingual User Guide.  The RoadTrip device consists of an FM transmitter, cradle and cigarette lighter charger plug joined together by a steel neck.  Although made of steel, there is some flexibility in the neck allowing you to twist and bend it into various shapes.  The RoadTrip will scan the airwaves and store three pre-set FM frequencies allowing you to switch between them when necessary.

The scanning process is carried out using SmartScan technology to optimise the transmission strength and sound from your iPod device.  The selected three frequencies are assigned to preset buttons. The scanning can be carried out automatically or manually covering a range of 88.1MHz to 107.9MHz.

Setting up the kit is meant to be straightforward but I did encounter a couple of problems that might need to be taken into consideration when deciding whether to purchase this particular product.  The collection of dock adaptors (iPhone, iPhone 3G, Touch, Touch 2G, Nano, 4G Nano and 80G) are identified by a miniscule label on the underside of each one.  As these labels are rather small and displayed as black on black, I found it difficult to actually locate them.  Fortunately, unless you possess several iPod devices and likely to switch between them, this is a task that only needs to be conducted once.

The second problem concerns the length of the neck stretching between the cigarette lighter socket end of the unit and the FM transmitter that actually holds the iPod.  According to the supplied documentation, you should be able to view the iPod screen when it is attached to the RoadTrip unit located in the car’s cigarette lighter socket.  However this proved to be an almost impossible task due to the dashboard layout on my Honda Civic car.  The 93mm length of the neck proved to be too short to allow me to bend it so that I could view the screen from my normal driving position.  Of course you could argue that viewing the screen when driving would not be advisable but this would ignore the possibility that any passenger would want this facility.

Fortunately, once I had manually selected available frequencies, the RoadTrip proved to more than competent at delivering the iPod’s audio content to the car’s FM radio.  As well as delivering the audio content, the RoadTrip recharges the iPod or iPhone as you listen to the music.  There was also the added advantage that the iPod was held firmly in position even though its screen was not visible to the driver (me) but then my eyes were on the road ahead.

The RoadTrip also has an option to link the RoadTrip to an Aux socket on a radio.  You will need an audio lead with 3.5mm jack plug as one is not supplied with the product.  Unfortunately as my car radio does not have an Aux socket, I was unable to test this feature.

The RoadTrip has been priced at £59.99 which is similar to other products delivering this type of functionality.  Despite the couple of problems mentioned, the RoadTrip is capable of a good clear audio signal to your FM car radio.