This tiny unit is somewhat confusing as being so small the controls are multi purpose and therefore there is a learning curve. However it is more than a standard MP3 player. 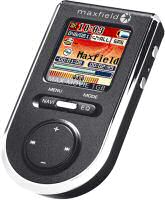 It is 6.5x3.5x1.5 and weights only around 50grams, certainly small enough to fit in the smallest hand. So what is the Maxfield Max Movie, it is a 1GB music and video player, FM radio, voice recorder and just for good measure it can record from an external source at up 128mbps.

As regular readers will know Maxfield are a German company and sometimes some words are strangely translated. The getting started guide helps working out most of the puzzles and once you have managed to change modules a few times most things will be okay.

The main problem I had was getting into the 'Settings' menu as that is only covered in the .PDF file and once I did it was more in German than English. The first thing you need to do is change the language to England! and then basic things like setting the onboard clock and timers - it even allows you to record FM radio - becomes easier.

The unit has two buttons on the right side, a rocker button on the front and a four position circular button below this, that is all the controls so as stated the controls do different thing according to where you are. There is a tiny - but very clear - 2x2cm display - stated to be 260,000 colours - on the face of the unit.

The top has earbud input, mini USB input (this is also the line in) and pinhole microphone as well as what looks like a mini camera lens but is in fact the anchor point for the wrist strap.

It comes with some decent earpieces and almost all the other leads you will require as well as the charger for the internal solid battery. The initial charge is for 12 hours but after that a couple of hours should recharge the unit. The charging is done via the mini USB adapter that goes into power adapter. The following file types are supported, MP3, WMA, OGG, JPG, AVI, MPEG4 and DIVX. However viewing video or photos on such a tiny screen is not really on, but for those who wish to use this feature the images or movies must be imported into a supplied package within Windows to adjust the size for the units screen.

The quality of the music player (MP3) was excellent and the normal range of EQ settings were available either from the settings menu - when you work out how to get there - or from the amazing seven line colour display, yes I did say seven line, these include track details , time elapsed, time remaining, EQ setting, time, number of tracks, battery remaining and more all clearly visible.

In FM mode the display is only six lines but still very informative, there are presets so if your favourite stations are in 102-105MHz area you do not need to scroll up from 87MHz all the time. The quality of sound was also surprisingly good.

Much the same with the Voice Recorder again a very clear interface and the sound quality was good mainly because the default recording was set at 128mbps but this can be adjusted - when you negotiate the settings menu - to a lower level. Finally the Line Record that I did not try as the input was again via the Line In that on this is mini USB and that would need a lead I do not have to take output from say a Mini Disc player or other such device, however the interface looked to be much the same as the Voice Recorder.

Once you have gone through the learning curve I have almost nothing but praise for this unit, tiny but powerful. I print the Amazon link below that at the time of writing has no price but I am told it is likely to cost around £135. As a music player, voice recorder and FM radio this is fine.