With the E1480W GE has packed everything that the majority of users will want in a digital camera. Despite having a resolution of 14.1Mpixels, a 3 inch LCD screen and a X8 zoom they have still managed to fit it into a package, at a competitive price, that is small enough and light enough to be carried around at all times. 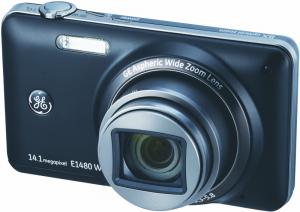 At roughly 4 x 2.5 x 1 inch thick and weighing only about 150g this camera can be easily be slipped into a pocket or handbag and so be to hand at all times and so is the ideal point-and-press snapshot camera. However, its wide range of features gives the user the ability to cope with a wide range of scenarios.

The power button, shutter release and zoom lever are all on top of the camera as is the playback button. The 35mm equivalent of the 8X zoom ranges from a wide angle of 28m to 224mm telephoto. The optical image stabilisation is quite effective in minimising the effects of camera shake at long focal lengths.

On the rear of the camera at the right hand side of the screen are the mode and menu buttons together with “func OK” button at the centre of the 4-way button group. Having pressed the Mode button one could step between various options. The most popular ones being Auto, ASCN in which the camera automatically selects the best scene type for still pictures, Portrait and Panorama which allows one to stitch 3 images together to make a panorama.

There is a whole array of other settings that are controlled by the 4-way button group. These include delete and face detection as well as the various display and flash options.

In addition to just displaying the picture to be taken, the LCD screen can optionally be overlaid with useful information about the current settings that the user has chosen. These include the mode, resolution and number of shots before the memory card is full. Pressing the “flash” button allows access the basic functions menus which include flash, self-timer, macro and exposure compensation.

The flash settings include auto, red-eye reduction and slow-synchro which keeps the shutter open for longer so as to allow pictures of people to be taken at night without having a greatly underexposed background. With the self-timer, in addition to being able to set delays of 2 or 10 seconds, there is a setting where shots are taken in accordance with the Continuous Shot settings. These are: continuous while the shutter button is held down; 3-shot; 3-shot last whereby the camera captures images continually but only actually records the last three prior to the shutter button being released; and time lapse.

In the box is the charger for the supplied lithium battery, cables, a wrist strap and a CD on which is ArcSoft PhotoImpression in addition to the 82 page user manual.

Overall, I thought that the camera was well thought out and user-friendly. For example, when selecting the different resolutions, there was an indication as to what print quality could be achieved so that the note against 8Mpixel resolution said “A3 printing” and 3Mpixel “4 x 6 inch printing”. Similarly the charger’s LED turning green when the battery was fully charged is a useful touch. However, although the camera can support SD card and SDHC card of up to 16GB which can hold a massive number of shots, the shooting capability will be limited at any time by the limit of the battery capacity which is claimed to equate to about 160 shots.

This camera, with a £149.99 SRP (and so will no doubt have a lower street price), will appeal to those who feel it is worth paying a bit extra for the additional features as well as those who, while they may have a larger camera such as an SLR, want a camera that they will be able to carry with them at all times.