For those that remember my review of the Flip Video Ultra in June this is a very similar product. However there are swings and roundabouts so read on to find out whats better and what is not. 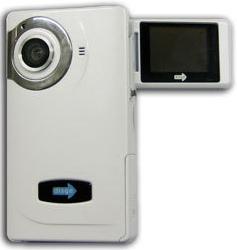 I would suggest anyone also reads my review of the Flip Video Ultra 30-6-08 as then you will be better able to judge which might suit you best.

This is 11x6.5x2cm and weights 150grams; mine was predominately white with a grey rubber material below the small TFT on the back.

Let's start with the base, this has a screw for any tripod you might care to use. The right side (from the back) has an A/V socket and a slider high quality to long play that can give twice the length of recording. The top has a rubber bung that covers a proprietary connector (lead not supplied) and the exit point for the USB connector. The left side has a push and slide button that sends the USB connector out of the top of the unit. Entry point for any SD card you might want to add additional memory and the door for the two 'AA' batteries it runs on.

The front has the lens and microphone. The back has the small 3x2.3cm TFT screen that can be pulled out from the right to be used up to 180 degrees however this is sprung and so it's either 135 degrees or 180degrees. Below this are the controls, four buttons arranged round the outside of the ubiquitous five position joystick. On the left play/pause and on/off and on the right delete and a tiny speaker that looks exactly the same as the buttons. The five position joystick has a big red record button in the middle, plus and minus top and bottom and left and right on the sides.

Once you have opened the box your troubles are only just starting as the industrial scissors will be needed to extract the unit from the plastic it's stored in. I can almost understand this sort of packaging on it's own but not within a sealed box that in itself is hard to open. Now insert the provided two 'AA' batteries press the on/off button for two seconds and whatever you are looking at is shown on the small display. Now just press the record button and you are recording. Press the record button again to stop recording. 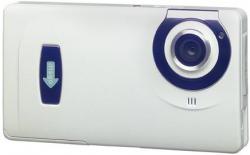 By default you are in high quality mode and the internal memory will store 30 minutes of recording. You could switch to long play in which case you can store 60 minutes. If you insert an SD card this will take over when the internal memory is full. However this means a card of 2GB or less.

Watching whatever you have shot on the small screen is probably enough to know if it should be kept or deleted. Plug it into a USB port and you can use Windows to view it on something like Windows Media Player. In my tests there was the occasional frame dropped a bit like early digital TV. However you really need to use the Component lead supplied to see it full screen on a TV. It really is just as simple as plugging the supplied 2.5mm jack in the socket on the side of the unit and the yellow, red and white leads into the TV. Turn to the correct channel and turn the Disgo on now watch your epics.

Image quality on a 32inch TV was excellent, sound was okay for speech or noises but music was not great. There is a small fold out manual that seems to cover everything.

When you attach the unit to a PC you can view footage via Windows Media Player or use the software provided on the unit. This is transferred to the PC and you can then View, Edit or Share. In native format it is around 17MB a minute. In my tests I made a clip of 225 seconds (64MB) and when compressed to send as an email attachment it comes down to 6MB, still quite large but viewable. However anything under around two minutes should be okay is the receiver and you both have broadband.

So once you have read the Flip Video Ultra review you will see which of the two has the plus items you might require. Certainly being able to have extra memory in the Disco is a bonus.

Doing my Internet searches found the Disco Video Plus at a best price of £69.99 and includes free delivery from the first link below.