Routers, and often wireless ones, are increasingly being used for broadband access and often enable more than one PC to access the internet. Consequently, it is only a relatively small step to add a network printer which can be shared by all users on the network. The Brother HL-2170W, weighing just a few pounds and having a footprint of less than 15 inches square, is ideally suited for moving around the house or small office. 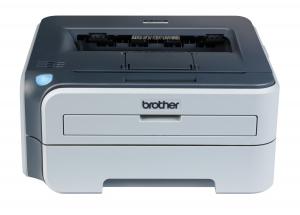 In the past the majority of network laser printers have been both too heavy and too expensive as they were intended for heavy-duty office use. Everything has changed with the introduction of products such as the HL-2170W, which is the most versatile of Brother's HL-2100 series of compact mono laser printers. Providing both wired and wireless network connections as well as USB it offers a range of facilities that will fit the needs of many users who have more than one computer. Just consider how often one has had to transfer the printer connection from one machine to another and then, having finished printing, transfer it back again. The alternative being to use a memory stick to transfer the files to the machine to which the printer is attached.

Although I haven't been able to test it as I only use XP, Brother states that drivers are available for both Linux and Mac as well as a number of flavours of Windows.

It is a straightforward task to set up each machine in turn using the Wizard provided on the driver disc. However, despite the fact that one is setting up wireless connectivity, in the interests of security, it is recommended that a wired connection is used during the set-up procedure.

I found the 2,400 x 600 dpi resolution provided good quality results and I was impressed by its speed although I felt that the claimed 22 pages/minute was a little optimistic. More important was that it is straightforward to use. However, 150gsm stock developed a noticeable curve when printed and there was a slight impression of the feed rollers. Nevertheless, the overall results should be very acceptable to the majority of users and, using Brother's figures, running costs are acceptable at less than 2p per page.

A wireless network printer is obviously more expensive than its wired-network only sibling, the HL-2150N. In fact, with the prices being £137 and £103 incl. VAT respectively on the Pixmania Web site (www.pixmania.co.uk) there is a £34 premium. If both one's router and PC are installed near the telephone master socket (the ideal place), and one is never likely to need to move the printer around the house or office, there is possibly no point in spending the extra. On the other hand, the wireless connection would obviate the need for cables which are prone to give trouble over the longer term and, even if you only occasionally want to use a notebook on the kitchen table, and don't want to have to go upstairs to the den to collect the print-outs, it is a relatively small price to pay for the added versatility.