Yes its true, the oh so vital tool we all hate doing is now available for FREE from Paragon Software. The most important thing on your PC is your data. If your hard disc crashes money can replace it, can your unbacked up data be replaced? 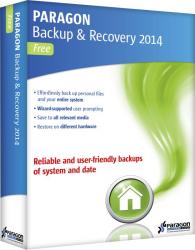 While it does not make the time required to complete the task any easier to find the fact that you have not paid for the software – from a reliable company – can lessen the pain.

The software is a download I will give the link at the end of this article.

I have tried it myself on both my test machine and my own main PC. It works as they even provide a tool to allow you to create a restore DVD or USB stick using Linux for the time when your master boot record has got fouled up and the otherwise OK PC fails to boot.

While my test machine is used to having things added and removed frequently my main PC is probably like most out there. Things go on and stay there but then updates arrive and this is how items get fragmented so a two year old Windows 7 system with 140GB of used hard disc space is probably a good test for a full system backup.

After you have done the full backup the other backups will be far quicker as all the files that have not been changed are not backed up again. So here what happened on a Friday afternoon and then one week later what took place on the next backup.

So at 3PM I downloaded the required software it creates two icons - Backup and Recovery and Media Builder -on your Desktop and once you run the very Windows 8 like interface (it works fine on Windows 7) you get a screen saying be patient and other similar phases while a very confusing and optimistic clock tells you the progress.

Being a belt and braces person I do not do anything else on the PC as remember this is a full system backup. While it should be able to handle a file being opened and come back to it why risk it.

After five minutes of preparation it states at 15.08 that there is 3 minutes 41 seconds to go. I know enough to know this figure will grow and not reduce for sometime. After 100 minutes (4.40PM) the figure has fallen to 5 minutes remaining, the maximum it showed at anytime was something over 14 minutes. Then at 4.50PM – 110 minutes after starting it has finished.

Now this is something that needs sorting and if you were using paid software it is probably more accurate in its predictions but remember – at the risk of being more boring – this is a full backup of a hard disc sector by sector.

Now onto what happens seven days later. I plugged in the external USB hard drive I used for the backup a week ago and now backup what has changed in the last week. A lot of emails, different printer and various Word files but little else has changed apart from some WAV files.

The whole process took 29 minutes and increased the backup size of 93GB backup by 31GB, more than two thirds of the time was taken by ‘writing clusters’ but to be fair the drive used to backup to was a USB2 one. USB3 would have been a lot faster.

Two weeks after the initial backup ‘Incremental 2’ it took 33 minutes. Increment three the next week (I was in the office far less) took 25 minutes.

However there were still some timing issues there was never more than four minutes remaining even though it was normally much more but please remember this is a free product.

Of course any backup is only proved when you need to restore and probably not when it’s a selected restore of a few files but the whole drive after a hard disc crash. I have tried the former without problem and I hope I will never have to try the latter.

The Paragon Free backup can be downloaded from the link below.