Dragon NaturallySpeaking version 12 is the latest incarnation of a long established speech recognition program. In step with increases in PC power, its speed and accuracy has been steadily improving. In fact, it can be argued that the performance is now such that even touch typists could find it worthwhile. 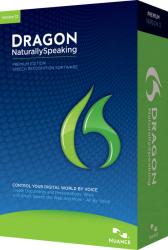 Despite the increase of texting, there continues to be a massive growth in the size and number of documents generated and stored on computer. While a proportion of those involved can type effectively, even more would benefit from the use of modern speech recognition technology which, for a great many people, will be faster and more accurate than what they would otherwise be able to achieve. However, just like learning to write, one really has to be prepared to practice with Dragon to achieve the best results.

Having installed the Dragon software, which comes provided with a headset, the user reads a short series of paragraphs to train it to his/her voice. The user is then given the option of allowing the program to search documents on the hard disc so as to build up its knowledge of the vocabulary used. Overall, one should allow roughly an hour for installation and setting up.

It is compatible with modern applications such as MS Office and Open Office as well as Internet Explorer and Firefox. In fact, one can also personalise Dragon by, for example, adding Twitter/Facebook commands.

In view of the fact that there are a large number of commands within Dragon it is impossible for the beginner to remember how to use them or, in fact, to remember them at all. The sidebar, which is located as you would imagine to the side of the normal text document, provides a crib sheet of the commands under various categories. Under the general heading “home” there are a series of subheadings “working with documents”, “cutting, pasting, inserting, undoing”, “moving and selecting”, “formatting” etc. Within these various sections it lists the word or phrase to which Dragon will respond.

With practice, one masters the commands that you most often need however, as can be appreciated, it does take a while to get the best out of Dragon. In this context, one of the notes in setting up the program says “be patient to start with”.

It is impossible to verify Nuance’s claim that Dragon 12 delivers up to a 20% improvement of “out of the box” accuracy over the previous version. In practice, however, I was satisfied with the accuracy I achieved and, where there were errors, I soon learned how to make corrections even though initially I needed to refer to the supplied Quick Reference Card or the sidebar.

Those who have to spend a fair amount of time on the keyboard could well find that it would be a worthwhile investment. There are a number of versions of Dragon 12, all of which use the same basic engine. The most relevant ones are the Home version, priced at £61.95 from Amazon, which will probably meet the needs of most home users but, for those who need full text control in Excel and PowerPoint, the Premium version at £114.63 on Amazon, which has a “numbers” mode will probably be more suitable. There are also the Wireless and Mobile versions each priced at £174.99.