Departing from the usual black-box approach to iPod speaker Systems JBL brings us something a little different - without sacrificing sound quality. 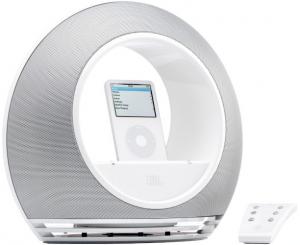 The JBL Radial does not follow the more common brick formula to iPod speaker systems, instead effectively being a vertically mounted donnut with the iPod nestling securely in the middle.

The first things that strikes you as you take the JBL out of the box is just how striking it looks - you don't need to hide this unit away in a corner. You're more likely to want to have it in clear view as a focal point to a room in it's own right. This has the benefit that you can easily get to it when you want to select music.

In the box as well as the speaker you have a power-supply, USB lead, 3.5mm-3.5mm jack cable for auxiliary input and a remote control. Setup is very easy - simply connect the mains power and insert your iPod.

I'm pleased to say the JBL is not all good looks and no substance. We have a few very good iPod systems in the office at the moment and the JBL just pips the post in sound quality (we have then in a line using the same iPod - the same tracks!).

The only control on the system is an on-off switch. Everything else is controlled either by using the iPod controls or by the included remote control. The remote is 'interesting'. It limits itself to six buttons marked +, -, <<, >, >> and 'square' (the symbol not word). The square button controls the 'mode', which in turn controls the operation of the other five buttons, there being two modes and the current mode being indicated by an LED on the controller that glows either blue or orange.

Orange means the unit controls the iPod - the other buttons allowing you to navigate the iPod menu structure, select tracks, albums or playlists, start and stop music. As with most iPod remotes I found navigating a menu designed for a specific type of control with a button based system to be clumsey.

In 'blue' mode the remote directly controls the JBL. The +/- buttons sensibly control volume, <> step back and forth through the tracks and > works as a play/pause toggle. 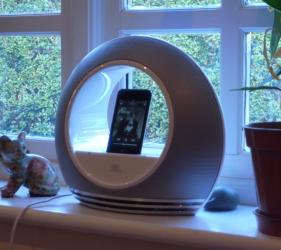 Although the sound quality is excellent one gripe I had was lack of granuality in volume control. Maximum volume is very loud - without loosing quality and without distortion, yet the system works equallity well at low volume. The gripe? There are only 7 steps between maximum and minimum volume, given the power that just isn't enough. I found one setting just a little too quiet while one more click had the sound reverberating around the room.

I've mentioned the sound quality. I'll mention it again, because it really is that good. The sound quality is exceptional - as you'd expect from a company that's been building audio systems since well before the iPods creator drew his first breath. JBL achieve this quality the an impressive array of technology. There are five separate speakers - one delivering low frequency from a neodymium bass unit and four full range drivers. This combination of drivers is configured to make sure you get excellent sound quality wherever you are in the room - not just directly in front.

The JBL Raidial measures 305 x 267mm (Width x Height) and is approximately 120mm deep, weighing a solid 1.2Kg. You have a choice of black or white - I'm reviewing the white variant, which I think suites the iPod design well and does make a change from the usual more black for these products.

External connections include a USB connector, lini-in and S-Video out. Yes - the JBL can drive video to your suitably equiped TV, unfortunately an S-Video cable is not included. The USB connector allows you to connect your iPod to your computer without having to remove it from the JBL.

One of those products that I'll be sad to see leave the GadgetSpeak office. In the week or so I've been using it I've grown accustomed to it's rich sounds!

Searching the Internet I've found the white version of the Radial available for £129.99 from an Amazon partner, which includes shipping. The black version for some reason is more expensive on Amazon at £155.98. The best price for the black version is £149.99 from Comet - although by the time you add shipping it's the same price! Despite there being many other speaker systems available for less, the sound quality of the JBL makes it well worth the extra money.

The white version of the JBL Radial available for $174.49 from an Amazon partner, which includes shipping. The price for the black version varies from $99 to $250+ from various Amazon partners! Despite there being many other speaker systems available for less, the sound quality of the JBL makes it well worth the extra money.

The white version of the JBL Radial available for €225,08 from an Amazon partner, which includes shipping. The black version for some reason is more expensive at €257,50. Despite there being many other speaker systems available for less, the sound quality of the JBL makes it well worth the extra money.