Runes, magical artefacts and hairy characters are all waiting for those who venture into an Emerald Tale. 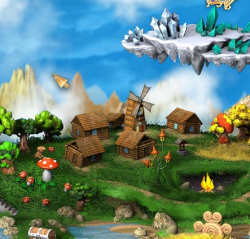 When it comes to the development of 3-in-a-row games, Enkord has plenty of experience.  Following on from titles such as Jewel of Atlantis, Jurassic Realm and Clayside, Enkord's latest 3-in-a-row puzzle offering is Emerald Tale.  Set, not in as you might imagine from the title, but in a world of runes, magical artefacts, hairy creatures and an over-abundance of plant-life - hence, maybe, the emerald reference.

With your on-screen persona as one of the long haired Chuzzle-like creatures, you have to travel around this strange kingdom.  Unfortunately the numerous bushes, shrubs, stones and boulders tend to get in the way and block your path towards the magic gateways that allow access to the next stage of your journey.  In order to clear a path, you need to create groups of three or more runes of the same colour.  The resulting explosion of such a conjunction will remove obstructions, so clearing the way towards your designated destination.

Sounds simple doesn't it?  But then you have to consider elements such as unmoveable boulders and additional obstacles that appear if any move you make does not involve a 3-in-a-row match.  If that is not enough to keep you on your toes then you have the distraction of needing to collect various gemstones conveniently left laying around, these can provide magical powers.  There are also Leprechaun coins. So maybe this is set in a mystical but then I thought Leprechauns dealt in pots of gold at the end of a rainbow.  These coins can be used to ease your path through the various levels or screens as you continue on your journey.

Still not enough to keep you interested!  Then perhaps I should mention that bombs and dynamite can also play a part in this game along with secret levels to test your puzzle solving abilities.  Of course will all journeys there is an ultimate goal and, in this case, you are on your way to meeting and defeating a dragon in order to rescue a princess (as well as having the satisfaction of not being beaten by the developers of Emerald Take).

The game does have a certain charm about it and should appeal to all members of the family.  Graphics, sound effects and the now compulsory music background track, are all well up to standard.  With over 110 levels to complete there should be plenty to keep you occupied.  My main concern is regarding to the addictive quality of the game which I found to be less prominent that other Enkord games.

As is usual with Enkord games, you can download a trial version of the game which imposes a set time limit on game play.  You can then purchase an unlock key, arriving via email, that gives you full access to the game.  System specifications are a Windows system, 95 or later, with a 400MHz processor.