Teaching a child to tell the time with an analogue watch/clock is not easy. I remember a comedy sketch done by the brilliant Dave Allen when he was desperately trying to teach a young child to tell the time using a conventional clock I have found a video of it link at the end, the punch line was he gave up and gave the child a digital watch, here something better as this just hugs the wrist like a bracelet with no strap to do up. 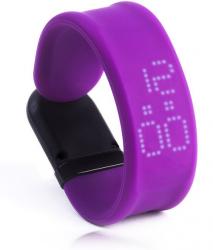 It is 18cm long, 2cm wide and around .5cm thick. 15cm of the length is a soft rubber; the last 4cm is solid and has two touch buttons around 2.5cm from the end these scroll through the options and show the current time and date. Touch the left button and red LEDs show in a four centimeter area in the middle of the soft rubber. Touch it again and it shows the month and day as numerals and touch again to see seconds. The display is live for three seconds just long enough for the child to see the current time.

Now the clever bit, bend from the ends and the last third folds down, do it again and the first third does the same so you now have a bracelet shape over the child’s wrist, best of all no strap to do up it just grips the wrist.

Unlike a lot of digital watches that require a lot of thought to set it up press one button to get the hour flashing press the other to change, just continue in that way till you have everything set.

I found a couple of willing volunteers to test it and they were five and six both thought it was a very cool item.

Now I come to the best part it is only £9.99 plus delivery from the link below while I was sent a plain black one with red LEDs they do a range of designs including Dragons and Astronauts.