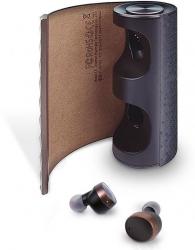 The PaMu Scroll is a set of Bluetooth earbuds that follow the recent trend of arriving with its own charging case that can provide a useful source of additional power and a facility for storing the earbuds when not in use.  Developed by Padmate, a company well known for its successful crowd-funding campaigns on Indiegogo, the PaMu Scroll kit consists of  a pair of earbuds, charging case, which forms the Scroll element of the package due to its rolled-up shape when closed, three sets of eartips, USB lead and User Manual covering a variety of languages.

As you will, no doubt, have noticed the content list for this product does not include leads to connect the earbuds to an audio source.  This is because the PaMu Scroll earbuds use wireless technology, in the form of Bluetooth, to make any necessary connections.  The USB lead mentioned will fulfil it tasks during the initial charging and subsequent ones of the PaMu Scroll.  The USB lead , which is of a standard-to-micro format, connects the charging case to a mains power source.  Both the Scroll case and, if inserted, the earbuds can receive a burst of power.  Fully charged the earbuds can deliver 3.5 hours of listening pleasure.  This period can be extended with up to three recharges from the Scroll charging case meaning the wearer will have almost 12 hours of total audio entertainment before a connection to a mains power sore is required.

When first removed from the package, the two earbuds will automatically pair wirelessly with each other to create a stereo link.  Bluetooth will then be used to establish a partnership with whatever device is being used to supply the audio.  It was noticeable that the actual Bluetooth pairing took far longer than I was use to when establishing links with other Bluetooth earbuds.  Switching to another smartphone for providing the audio improved the speed at which the Bluetooth link was established.  Presumably the slow speed encountered with the first smartphone device was due to it rather than the PaMu Scroll.  When displaying the Bluetooth connection, both smartphones identified the Padmate product by name and its current battery level percentage.

With regards to Bluetooth, the PaMu Scroll comes with version 5 of this technology which promises efficient power consumption and a 4x greater range of transmission.  Unfortunately when I tested the range delivered by Bluetooth 5 on the PaMu Scroll. I encountered breaking up of the transmission as I approached a distance of ten metres which was similar to that obtained with earlier versions of Bluetooth.

With a weight of 5g, the PaMu Scroll earbuds feature a microphone allowing for phone calls to be conducted via the Padmate product and a paired smartphone.  Built into the earbuds is a 6 millimetre graphic driver to produce reasonable sound quality and lifelike voice reproduction.  When not in use the earbuds can reside in the scroll container where they are held in place magnetically.

Offering prospective users some form of choice, the earbuds are available  in Standard or Glory versions while the Scroll container comes in a choice of Graphene, Glory, Black or Sakura colour schemes.  Whatever you choice of colour or style, the PaMu Scroll has IPX6 certification helping protect the product from splash water, sweat and rain incidents.

Each earbud has a small area which provides touch button facilities and the unit's microphone.  For easier access it is recommended to insert the earbuds so that this control area is situated towards the bottom of the listening device.  Depending upon which earbud is selected plus the number and length of pressure applied, you can carry out tasks such as play/pause, move to next track, answer or decline a call and active Siri for issuing voice commands.

While the earbuds felt comfortable in the ear, the left earbud did have a habit of falling out from time to time when I was doing little more than sitting in a chair.  The dislodged earbud would then bounce in a random direction.  Locating the small earbud after such an incident did, sometimes, prove difficult.

Apart from the left earbud having a tendency to become dislodged, I was generally impressed with the appearance and performance of the PaMu Scroll.  A quick check of the Internet revealed this product is available from Amazon UK priced at £77.11.