The Samsung ST100 Digital Camera is small enough to fit into almost any pocket but it also has one of the largest TFT screens around. It is totally touchscreen in operation so those who have been brought up on touch will certainly enjoy using this camera. 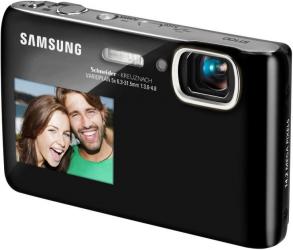 The face has the lens and the flash both are in the same plain with the flash central on the unit and the lens towards the right edge. It uses a periscope type device inside the camera to zoom as the lens never visually moves in or out.

The right side has an anchor point for a wrist strap, the left side just say 14.2MP the resolution. The base has a door behind which are the solid battery and any SD card you might use, it has has the connection for the provided proprietary USB lead and of course a tripod screw fitment point. The back is the 7.7x4.6cm TFT which using the imperial measure (diagonally) is 3.5inches. This leaves the only other item the top of the camera.

There is a small rectangular button, a slightly larger round one, a bigger and slightly proud silvered one and finally a rocker bar. All are well labelled as to their purpose but you will need to get to know the menus via the touch screen.

The Quick Start Manual (11 pages in English) should be more than enough to get even the novice user up and running.

Pressing the on/off button will light up the TFT and while it will show whatever you are pointing towards there are icons around both the left and right sides of the display with reminder icons of settings along the top.

A more detailed explanation can be achieved using the single up arrow that sits in the centre of the bottom of the display.

I found the TFT gave an accurate image – something not always achieved – and the internal zooming worked well and the motion was smooth the only indication of how much was shown on a bar along the top of the TFT. In fact the unit was less prone to camera shake as the lens does not extend so better pictures without a tripod.

One thing supplied is a small cloth like those with a pair of spectacles you may think it’s a luxury but the shiny black surface shows every little finger mark especially on the front of the unit, so why make it shiny black?

For those taking a self portrait it can display what is about to be captured on the front of the camera as well as on the TFT. This can also be useful when trying to capture images of very young children who often lack concentration. It is a simple tap action to turn this feature on or off and the person knows when they are captured.

Start with Smart Auto it is rather good and improve your ability as everyone else thinks your images are great. This is of course down mostly to the image sensor. The optical zoom is 5x which is enough to have to avoid obvious camera shake if not using a tripod or other solid object. The Schneider Lens is 6.3 to 31.5mm equivalent.