Yes the manufacturers inform me the Modu is the worlds smallest phone. As such it has no keypad all the controls are via the screen. Should you want a keypad or a camera then a sleeve can be purchased. However then its not the worlds smallest phone. 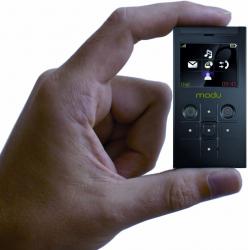 It works as I have made several calls from it but making them when you have to input the number is a slow task as you need to highlight each number on the 2x2.5cm screen and then press a key to accept then highlight the next number and press a key to accept. Of course if you are dialling someone in your address book it’s a lot quicker and very little different from a conventional sized phone.

Looking at the phones face there is the screen and below that the normal make call green button on the left and end call button on the right. There are also five dots in the + shape and these working with the phones menu are your controls.

However this is not just a phone as it can play music, a set of earbuds are included but the fitting on the base beside the USB socket is propriety. You can also send and receive messages but the same problem mentioned above with typing a number is increased here with three possible characters by each key. One nice feature is that there are three pre composed messages, ‘I’ll call you later’ ‘please call me’ and ‘I’m running late’ The only other fitment is a very tight fitting door at the top of the left side behind which you open to insert or remove your SIM card. The battery is sealed so you cannot access it yourself should it pack up.

However I was sent it with a skin (jacket) that makes it a normal phone and this jacket also has a camera making it more like the abilities of any other phone around.

The size becomes 9.5x5.5x15cm and it weights 85grams. The 5.5cm width is maximum towards the top and it decreases to 4.5cm at the bottom.

The whole phone just drops into the top of the jacket and then the top closes over it making it sealed in the skin.

It now becomes a normal phone as below the screen are not only the keys described above but below them the normal 12 keys you find on most phones. The one slightly unusual feature is that the camera (3.2MP) is towards the base of the back and although there is a button it is easy to point and find your fingers are over the lens area. You have to get used to placing your grip further up the unit. It also has an LED flash something that still a lot of conventional units do not have.

The various skins available all seem to have names but this the Night skin is the only one that has a camera. It is two subtle shades of purple, close enough to pink to be accepted by ladies yet far enough away to be used by men, clever.

There is a sixteen side fold out Quick Start Guide that should enable you to get started with the phone. However unless you think of a reason to need such a small unit I would also invest in a jacket to make dialling and texting become viable options which in my opinion they are not with just the tiny phone without a jacket.

Currently the units and the sleeves are only available in the UK from www.purelygadgets.co.uk.

The Modu phone is available in Black, Metallic, Pearl or Blue, mine was Blue all available at £99.

Various jackets are available at prices between £29.99 and £49.99 each the camera one is the highest price one.

When the phone and the night jacket are purchased together there is a small saving and the price is £142.48

I already got Modu-T phone i love that phone  i still wanna buy Modu 1 phone where can i buy it
Rating:

I am now told the record the Modu holds is for the lightest phone and not the smallest phone.