No matter how skilled one is when using a virtual keyboard on a touch screen, a proper keyboard is far better when working with text. ZAGGkeys Universal Bluetooth keyboard has been designed to work with various sizes of tablets and smartphones irrespective of whether they are iOS, Windows or Android devices. It is small and light and will make a very useful accessory for those who need to do a reasonable amount of typing on their tablet or smartphone. 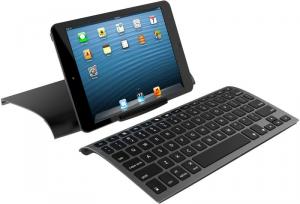 The keyboard itself is grey in colour with white inscriptions on black keys. It is sized 245 x 135 x 22mm and weighs 300g complete with its slide-on (black) protective cover which, when removed, doubles as a stand for one’s tablet or smartphone. It has a curved cross-section which provides the rake necessary for comfortable typing. On the underside of the keyboard is the iOS/Windows/Android selector slide switch while at one end is the micro USB power connector (50cm USB cable provided) and, at the other, is the power switch and Bluetooth “pairing” button. As I don’t have any Apple products I have only been able to try it out on Windows and Android devices. This, I found, was a straightforward task and found that, despite it being much smaller than a standard keyboard, it had a nice “feel” to it and was relatively easy to touch-type.

This is a QWERTY keyboard with a row of function keys. All of these keys are used in the iOS mode while certain of them, according to the diagram provided in the instruction leaflet, are N/A (not applicable) when in the Windows or Android mode. In addition, I found that in the Windows mode when using an ASUS Windows 8 tablet there are errors in the keyboard mapping. For example when typing “ @ “ (at symbol) the result was “ “ “ (quotation mark) and vice versa. In practice, this was no more than a minor inconvenience. After all, this is far less of a problem than attempting to use a virtual keyboard, which obscures an appreciable amount of the screen with Word or Excel on a tablet.

Having a claimed battery life between recharges of up to three months of regular use “of up to 2 hours a day” it would be all too easy to forget to charge it. This is taken care of by the battery status warning LED which, when the keyboard is switched on, flashes green when over 50% battery life remaining; yellow between 25 and 50% and red when less than 25%. It can also be checked at any time with simple key press.

The ZAGGkeys Universal is a recent addition to the company’s portfolio. It is a well-made product that, with its protective cover, can be carried around safely and then used with three operating systems. Consequently, even though it is priced at £59.99 + VAT it could well be an effective solution for many tablet users.