WOWee  no I have not been partaking of certain substances nor have I accidentally impaled part of my anatomy on something sharp. 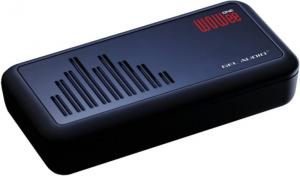 WOWee is the name of a product that offers to enhance the audio experience when listening to various devices such as your mobile phone or MP3 player.  Although specifically designed for use with the ever-growing ifamily (Phone, Pad and Pod), the WOWee will work with any device with a standard 3.5mm jack headphone socket.

Recently I have had the opportunity to check out the WOWee One Classic.  This is a slab-shaped unit available in a choice of Polar White (the review unit with a metallic silver trim), Classic Black, Sophisticated Chrome and Pretty Pink – sounds like the company has employed the same person who came up with the colours for Sony Ericsson handsets.  With dimensions of 60 x 120 x 25.8mm (W x L x H), the unit weighs 200g which, while substantially heavier than the probable audio source device, should not discourage you from taking it on your travels.  The WOWee devices combines a speaker unit with a Gel Audio™ driver and an internal Lithium Ion battery rated at being capable of delivery up to 20 hours of power.

Some thought has obviously gone into making the WOWee look appealing especially with the review sample.  The combination of white and metallic silver with the Manhattan style of skyline decoration on the top of the unit certainly caught my attention.  Sockets for miniUSB and 3.5mm jack connections are located at one end of the unit while a pad of a slightly tacky rubber substance covers the base of the WOWee.  Appropriate leads are provided for recharging the unit via USB and linking to an audio source.

The WOWee works by enhancing the low bass frequencies it receives from the audio source.  It achieves this task through its ability to vibrate.  By placing the WOWee on a flat surface, such as a table or even a box, you are rewarded with a warmer, more rounded audio output.  You only have to lift the WOWee from its surface base to hear the difference it can make to the sound you get.

There are a couple of points you do need to be aware of when using the WOWee.  You could find, as I did, that the WOWee will start to dance its way across the surface on which it is placed when being fed audio from a device.  This will happen if you have neglected to remove the covering sheet that initially protects the tacky rubber substances and will stop it from performing its function of holding the WOWee in a static position.  I would also recommend not using the WOWee on an upright surface as it could easily become detached.

The second point to be aware of is the lack of a dedicated on/off switch.  The WOWee battery is automatically activated when you insert the audio lead into the 3.5mm jack socket.  It does not need to be connected to an audio source device for the battery level to be decreased.  While this lead is attached, even if you have turned off the audio, the battery will continue to be drained of power and you could end up with a flat battery.

Apart from this niggle, I was impressed with the ease of use, functionality and performance of the WOWee.  Maybe some means of storing the audio cable when not required would be something the company could consider with any future products.  I look forward to seeing how this product develops.  The WOWee One Classic has a price ticket of £49.99.

I am sure this is an excellent device but have we not just closed the circle?
For many years much research was spent on improving high quality audio, then these silly little MP3 players etc took over and the sound was degraded to the level of a tinny transistor radio. Now we have to buy equipment to improve the sound of these downmarket machines.
I remember a song by Flanders and Swan that summed this up nicely. "I had a little gramaphone, I'd wind it round and round"