Taking your ZENV MP3 player on a car ride can be a musical entertaining experience that can be enhanced by some additional equipment. 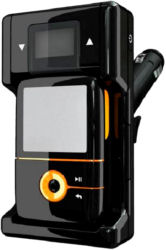 The popularity of various portable music players, whether of the iPod or different MP3 models, has resulted in an increase in the range of accessories developed for such products.  Normally developers of these accessories tend to produce items specifically for the iPod range or those suitable for use with any MP3 player whatever the brand.  QDOS, however, proves to be an exception by taking the route of developing for one particular brand of MP3 player - that of the Creative Zen range.

For those not familiar with QDOS, or are perhaps a little confused, I should explain about this particular QDOS.  At one time QDOS referred to the original operating system software that helped kick-start Microsoft's initial rise to dominance.  QDOS stood for Quick and Dirty Operating System.  Later it was used to identify the operating system used by the Sinclair QL computer.  This QDOS, however, is a brand name used by Reso Ltd, a company with offices situated in

As part of its range of accessories for the  Creative Zen, QDOS has released an FM Transmitter for the Zen V or Zen V Plus player.  Designed specifically for in-car use, this is a one-piece, reflective black unit consisting of a cigarette lighter charger plug and a docking station for the ZEN V player.  These two elements are connected by an adjustable locking device that allows you to position the player at various angles for easy access in the car.

The docking station features a 3.5cm audio jack; mini USB power jack; a pair of channel keys for adjusting the FM channel frequency; power switch; and a backlit 2cm LCD display.  Setting up the device could have been made slightly easier by a more convenient positioning of the power switch on the QDOS device.  This power switch is located near the rear at the top right side of the docking device.  When plugged into the cigarette lighter socket this switch is hidden from view. As it requires at least a one-second hold before there is any response, switching the device on is not the easiest task.

Once turned on you will need to match the transmission frequency of a vacant FM channel on your car radio with that displayed on the transmitter's LCD display.  You can adjust the QDOS transmission setting by either 0.1 or 1.0MHz increments depending upon whether a short or long press of the appropriate up/down channel keys is used.  As is usual with such devices, the QDOS transmitter will automatically shutdown if it fails to detect a signal from the ZEN V device for a period of one minute - this is a regulatory requirement.

I was unable to detect any problems with transmission from the Zen V player to my car radio using the QDOS kit.  Apart from the poor positioning of the power switch, I do have one other slight criticism of the QDOS device.  Rather surprisingly, this FM Transmitter can not be used in conjunction with the Zen V case that the company has developed as it blocks access to the Zen V's mini USB port.  (I shall be taking a longer look at the QDOS Zen V case in a later review.)  On the plus side, these inconveniences are more than compensated by the transmitter's ability to supply power to the Zen unit and hold it in a fixed position rather than have the MP3 player sliding about in the car.  The QDOS Zen V FM Transmitter has been priced at £39.99.