It almost crossed my mind that I had been forgotten by Acer with regards to review products when an offer arrived to check out an Aspire model. I was reasonably impressed. 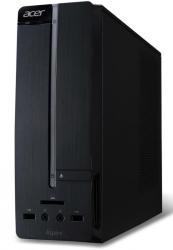 In the past I have had the opportunity to look at a number of Acer computers.  These models have been exclusively laptop units belonging to either the Aspire or TravelMate family.  Now it is the turn of another Aspire model to supply my computing needs but this time it is a desktop system.  The Acer unit in question is the Aspire XC600_W.

As the performance of our home computers have improved with the emergence of faster processors, larger capacity hard drives, increased and faster memory and more connectivity options, so the size of the system box has reduced in size.  While this Aspire model may not be the smallest such desktop unit around, the Aspire XC600_W is one of the smallest that I have been able to get my hands on for testing purposes.  The system box has dimensions of 269.5 x 100 x 367mm (H x W x D).  At one stage I had this Aspire model positioned alongside an IBM tower system with the Acer unit being totally dwarfed.  I reckon I could have fitted four of the Aspire XC600_W units in the space occupied by the, admittedly rather ancient, IBM model.

The front face of this box gives the appearance that it features two vertical flaps, separated by a silver strip running down between them. You feel that you should be able to open both flaps.  However the left flap is permanently fixed in position and you can only move the right flap.  Once open this flap will reveal the unit’s optical drive.  This is a DVD Writer which, because of the rather slim width of the box, has been inserted vertically rather than the more normal horizontal orientation.  Apart from an occasional attempt at inserting a disk the wrong way round, this change of orientation caused no problems.  Positioned below the flap arrangement you find a pair of USB ports, audio in/out sockets and a multi-type memory card slot with support for Memory Stick, xD, SD and MMC formats.

A further six USB ports are located at the rear of the unit.  Disappointingly all the various USB ports are of the USB 2.0 variety.  I would have liked to see a couple of these ports to be of the USB 3.0 type for when attaching peripherals supporting this latest technology.  As well as the USB ports, the rear of the box also features a second set of audio 3.5mm jack socket connections, HDMI port, Ethernet and sockets for attaching the supplied keyboard and mouse.

Before leaving the rear of the unit I should point out the presence of two stubby protruding screws.  These screws are used to attach two antennas that are supplied as part of the package.  These antennas help provide the Aspire XC600_W with wireless capability which explains the “W” part of the system’s title.  There is support for 802.11a/b/g/n connectivity.

There are a number of models in the Aspire XC600_W series.  In the case of my review unit, moving inside the box you will find sitting at the heart of the system an Intel Core i3 3220 processor running at 3.30GHz.  Backing up the processor is 4GB of DDR3 SDRAM.  Storage is covered by a 500GB Serial ATA 7300 hard disk and there is also the DVD Writer optical drive.  You do get a couple of expansion slots in case you need to add extra features such as maybe USB 3.0 capability to this system.

Setting up this system is straightforward.  You need to provide the monitor while you have the option of using the supplied basic keyboard and mouse or a favourite desktop set.  The On button is located at the top of the fixed flap and depressing this will start the set up process of installing the supplied 64-bit version of Windows 8.  As part of this installation procedure you will be given the option to include the unit’s built-in wireless facility.  This process produced the only slight hiccup in the whole process.

A list of possible networks was displayed and this included my own home network which I selected.  Unfortunately after entering the correct password, a connection could not be established with the main hub which was approximately 10 metres away with the signal needing to travel through five solid and thick walls.  However by turning the Aspire XC600_W though 90 degrees and moving it slightly to one side, the connection was quickly made and I had access to my home network with all that that entailed.

While not as universally popular as the previous version of the software, Microsoft Windows 8 is handled in a quick and efficient manner by the Aspire XC600_W.  Boot up is fast and I encountered no problems when running the software during the testing period which included running HD movies to the Aspire XC600_W over my home network.  A rating of 4.7 was achieved for the Windows experience.

As is usual with Acer, the company has included a number of additional offerings in the form of trial versions of McAfee Internet Security, Norton Backup and LoveFilm.  You also get a link to Acer’s online shop, AcerCloud and a small utility to help with various shut down options.  Prices range from £279.99 for the Aspire XC600 series.  I would estimate that the cost of the unit under review would be priced in the region of £360 and at this price I would consider purchasing a unit if I needed a replacement.