This Android device will easily fit in a pocket or purse, the screen is however larger than you think as it hinges in the centre giving a view that is far larger than the overall size of the Tablet and certainly worth a look. 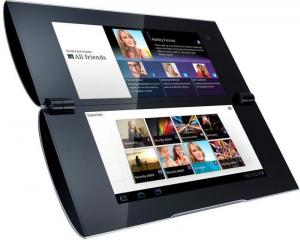 The Sony Tablet P measures 18x8x2cm the last figure is at the centre as the unit is a squashed ‘o’ shape and the edges are only 1cm it weights 365grams.

The viewable screen is 12.5x12.5cm and unless we believe in the ‘Tardis’ principle something must be wrong? Well no because the screen is in two parts with around 1cm missing in the centre and when a line of text is split it does look strange but it is easy to scroll up of down making the gap fall between lines on the screen.

For those of a mature nature I suppose it most looks like a Psion Organiser.

It runs Android 3.2.1 (release 2) and of course with the hinge you can tilt the top part up from flat to make it more easily readable when on a desk. You can rotate the screen but as it is square I see little point in this action.

Shut the unit and the screen blanks but when you open it again you will be where you were. Booting time is around 25seconds when you turn the unit off. It has stats to show where battery use was taken and over 50% is screen even when running on a wireless network.

The right edge has on/off button with DC input next to it then USB socket and volume up and down buttons. The back, right side and base are clear with the units camera on the top towards the right side and headphone connection on the front edge also near the right side.

It will open flat but from there (180%) till less than 45% the screen is on and showing. It has the ‘normal’ Android five screen principle with the default to the centre of five. One line of icons along the top of the screen and various other icons along the bottom as well as the clock other Apps are in the remainder of the screen.

Last year I saw an early version of Sony Music/Video Unlimited and of course that is available for use on the Tablet. A very good getting started guide is installed on the unit and this is one of the few times I needed to stretch two fingers apart on the screen to enlarge the display text and it works well immediately enlarging it for you.

For those Apps designed for this Tablet the break in the centre of the screen is unnoticeable for others as stated you may on occasion need to scroll up or down but after only a little use this becomes so easy it becomes automatic.

For those who own a Play Station – which I don’t – there are special apps and something called Play Station Suite.

However you are not limited to ‘special apps’ and anything on Android Market the unit also supports DLNA for easy connectivity.

Although my test period was short for anyone requiring a small Tablet this certainly almost cheats its way to the top, the idea of a split screen is great, very small form factor and very light weight make it an excellent choice. The only downside is getting used to the split screen but I found it easy to do that so no real minus points.

Well maybe one the price, the Sony Tablet P is available from the first link below for £499.99 with free delivery.