Finally I think some manufacturers are listening when people moan about the black surrounds showing fingermarks. The solution is to simply remove the black, on this only the base and the keyboard area are the dreaded black. 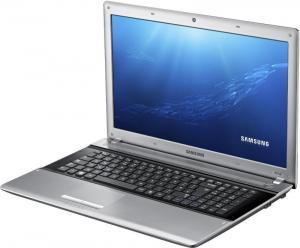 The Samsung RV720 is a large unit at 40x28x2.5cm, more importantly the viewable screen is 38x21.5cm giving the diagonal imperial measurement of a tad over 17inches. Now the first disappointment the screen resolution is only 1600x900.

The left side has the DC input, Ethernet, two USB2 ports, VGA out, HDMI, microphone and earbud sockets and an SD card port. The front is clear and the row of five pinhole LEDs that live in front of the trackpad are invisible when the lid is shut. The right side has the DVD optical drive a further USB2 port and finally a Kensington lock port but on a unit of this size you would need a huge poachers pocket to walk off with it unnoticed.

As the lid opens to around 125% the rear is clear as the screen surround goes around 1.5cm over (or should I say) under it.

Open the matt silver lid and the keyboard area behind (4.5cm) and in front (9.5cm) of the keyboard are both silver. The keyboard is a full size one of 104keys with 3cm clear on either side of it. There is 12cm left of the trackpad and 20.5cm to the right of it. The track-pad itself is 9x7cm with the mouse buttons in front being silvered.

Behind the keyboard are the speakers and the on/off switch. The screen surround has a web-cam and the microphone is towards the left in front of the keyboard.

Booting takes around 45seconds and shutdown from desktop takes 10seconds. As with most items I get in for review they are delivered in a state where updates have not been done for a while so once I established a wireless connection I do them – in this case 56 – while I check out whatever software is provided. This normally also means setting up the trial of Norton to avoid the nag screens each time you boot up. This process took 65 minutes before a reboot was demanded and then another four updates before Windows and Norton were happy. During this time IE9 installed and I am pleased to say the 64bit version now seems to work correctly, or should I say the add ons it requires are now available so that it performs correctly. Total update time just short of 90 minutes.

I did all this on mains power – you do not want a battery dying during updates – in normal use I got around 7½ hours between charges, this includes some Internet use as well as using a range of applications. A full charge from empty took 2¼ hours. One test I do is when fully charged to turn it off for a day to see what if any discharge takes place, after 28hours off it still read 100% which is rather unusual as 1or2% loss is more normal.

Another test I do is run a continuous test while I am streaming music from the Internet and at the same time working on other applications here I got just on four hours before it was begging to be attached to the mains.

It comes with Windows Home Premium 64bit version, Microsoft Office Starter (Word and Excel with some adverts) some CyberLink software including the excellent YouCam that allows you to use the inbuilt webcam and a range of game trials.

The processor is Intel Core i3 2310M, it comes with 4GB of RAM and 674GB hard disk spread over ‘C’ and ‘D’. The Windows Experience score is 4.7 made up of Processor 6.4, Memory 5.9, Graphics 4.7, Gaming Graphics 6.0 and Hard Disc 5.9. I found the graphic figure somewhat surprising ‘A’ with the differential between Graphics and Gaming Graphics and ‘B’ the fact it would otherwise be near to 6 the maximum possible is 7.9.

Doing my Internet searches found the Samsung RV720 at a best price of £743.94 with free delivery.