I first saw this demonstrated early this year, it looked great. However when I tried to do the same, problems occurred, I asked advice and now a later version of the software seems to have solved all the problems that I initially had. 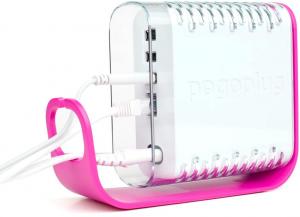 It is 11.5x12x6cm it has a USB port on one end and three USB ports in a column on the other with Ethernet port below that and the two pin power input at the base. The whole thing is in a frame that is 17cm to keep it balanced. While the PogoPlug itself is cream the frame is pink.

PogoPlug is basically a switch that allows you virtually unlimited storage in ‘The Cloud’ at no extra cost you just buy the PogoPlug. You are warned that if you try to store large files (over a GB) that problems may occur in practice I found .5GB gave problems. I also found transfer of files was slow but they can be sent overnight.

It has no storage on the PogoPlug you attach either USB memory sticks or portable hard drives – it has three ports – however do not expect immediate recognition especially if you are attaching hard drives to the PogoPlug.

With the latest software you are warned that initial response may be sluggish while files and folders are being read. The new version of the software allows the PogoPlug to be given a drive letter (or letters) in My Computer meaning that you can read the PogoPlug just like any other drive on your PC and files can be dragged and dropped in the same way. It can even be read by more than one PC at the same time meaning that anything stored on say an external hard disc is immediately available to anyone connected to the network.

This is a basic NAS used in the way I described it, however it can be used via the web interface anywhere in the world. Let’s say you have a PC connected to the WWW in Devon and you are visiting Frankfurt and you want files from your Pogo Plug in Devon, no problem. You can even store TV and Radio programs in this way with a PVR.

One advantage is that the ‘local’ storage can instantly disconnected and be used in the conventional form as a USB memory stick or portable hard drive should you wish. Having setup several NAS devices recently I can assure you they are not always as easy as downloading a small (3.72MB) file from the PogoPlug website and installing it.

Items stored on ‘The Cloud’ do not require your Pogo Plug to be turned on at all it is just storage space allocated to you as you need it. While I use another product to transfer files that are needed elsewhere the free limit on that is 2GB and while that is a lot of word processing documents things that have images are a lot larger and therefore the PogoPlug method certainly has merit. You can also use PogoPlug to share a folder or folder with another PogoPlug user meaning that data can be in two or more places at one time should you wish.

Ideal for items like say a music library that are going to be always available but for fast access other items may be better. However once on the drive or stick and once the PC is refreshed then the data is available to all.

Doing my Internet searches found the PogoPlug available from the first link below at £95.99 including free delivery.

I found the PogoPlug available from Amazon on the first link below at $124.99 including free delivery.