This is the first of the latest batch of Logitech keyboards to come my way. This is a new breed of keyboard that notes the increased number of notebooks that people use on a desktop. 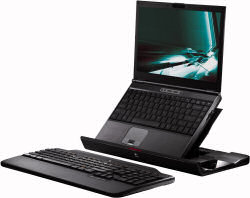 So apart from this being a full size keyboard it also comes with a stand to raise your notebooks screen so that in effect you have the same arrangement as you would get with a desktop, so you just put your laptop in the stand and forget it has a keyboard once you have tuned the cordless offering here to your notebook.

So first the keyboard it is a 105 key offering with three small extra audio keys under the cursor keys, it does not look that different to a lot of other keyboard apart from the fact it is intensely black with only small white letters on the keys. The 12 function keys also have an extra function all initiated from the extra key to the right of the spacebar between the Alt Gr and Ctrl keys.

I struggled to find out how it worked (I was told that an A5 envelope should have been included with instructions) as the only info I had was on the back of the box. I found the two 'AAA' batteries in a cardboard sleeve in the box and another sleeve contained a power adapter and looking at the stand worked out that would provide power to that but still no idea how the keyboard communicates to the rest of the world.

Turning to the stand (in some ways like a deckchair) many possibilities but when you work out how it opens you find a USB lead inside hardwired and that connects to your notebook and also inside the stand is the receiver for the keyboard. The power adapter is only likely to be needed should you use high drain items on the three USB ports on the stand.

The stand is 23x41x15cm when erected. Rather like a book support with the keyboard sitting at 45degrees and raising the screen to near vertical. It is stated to accept any notebook up to 15.4inches.

I am somewhat surprised that no mouse is supplied with the unit as with the notebook keyboard being at 45degree angle I think it unlikely you would be using any built in trackpad. So one of the three USB ports would be taken by a mouse.

Not having the instructions was a problem but it did make me look at the simple design more fully and work out all the possible combinations. Certainly raising the notebook screen means the working position of your neck is a lot nearer that of a desktop setup as in normal use the notebook screen is either at table/desk height or even worse at lap height so you are forever looking down. While your head/neck position is still probably downward it is far less than it would be without the shelf and a normal keyboard is always an advantage over those in a notebook.

While Logitech do of course sell mice I am not sure why one was not bundled in the box with the keyboard and shelf.

Doing my Internet searches found the Alto Cordless at a best price of £68.80 from the first link below.

Conceptually, the Alto Cordless is a nice product. In reality, I would bet that it is the worst product ever released by Logitech.

I currently own the Cordless Desktop Pro and recently bought one of the new Laser wireless desktop sets for my mom, as I am a Logitech fan.

However, the Alto cordless fails in a big way at two of its claims: cordless capability and the USB hub.

The cordless is simply horrible. Sometimes (2-3 times per page of text), while typing, the keyboard will stop responding and will instead clone the last letter multiple times, e.g. baddddddddddddddddddd

Regarding the USB, I connect a USB corded mouse and a Blackberry phone to the keyboard. When my laptop goes into a low-power mode (not sleep or standby, just a lower-power mode), it seems that the USB connection breaks and needs resetting. In order to reset, I have to shutdown my laptop and power-down the Alto.  I think it may be a compatibility issue with Vista Business.  It has caused blue screens once in a while.

If Logitech would give me a decent trade-in opportunity to get this out of my hands, I would take it in a heartbeat. Otherwise, I am stuck until I decide to spend bucks to find a replacement.