This is version two of the Wake Up Light. I reviewed the first one nearly two years ago (26-3-08) and this one is smaller and does extra things so it is certainly not only a lovely peaceful way to be roused from your slumbers. 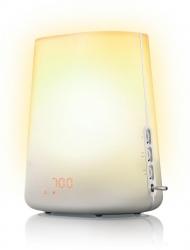 The most important part is the light. I have tested Philips Wakeup Light extensively through the darkest days of the years. You can set the maximum intensity of the light but whatever power you set it at 30 minutes before the set alarm time it starts glowing at a very low level slowly building up (like a very fine light dimmer switch) to the maximum level you have set that coincides with whatever alarm you have set. I found that I could gently wake around ten minutes before the alarm even if I had a very late night and best of all I avoided the jolt of being woken from a deep sleep.

It is 22.5x20x15 at the base and slightly coned up so the top is 14x11cm. The only leads are the hard wired wire FM aerial and the power leads, both emerge from the base at the back of the unit. I am not normally a fan of wire aerials but this 1.2 metre lead gives a good clear sound for the FM radio. The near 2metre length of power lead should mean that the unit can be placed in a suitable position for reading from the light and to reach the controls.

There are three wheels towards the base on the right side. While they are marked and explained in the four side illustration only thirteen language Quick Start guide I suspect most will need the eight sides of English part of the User Guide to get things adjusted as you want it as the settings using the three buttons can be misunderstood. The other control is a three position rod switch which sticks out of the side just below the three wheels.

Apart from a tone and the Radio you can be chosen to woken by Bird Song (my favourite) Drums or Pipes. All the settings are adjustable but tend to start very low so if the light has failed to wake you then the tone etc will not suddenly jolt you into consciousness but allow you to more slowly come round, especially the Bird Song.

If you are still struggling you can push the switch down to allow you that snooze but I only ever tried it in a non sleep position as I never wanted to snooze as the increasing intensity of the light had always woken me gently.

Even if you are simulating ‘dawn’ well before the world outside the light works well to give you the best start to the day. 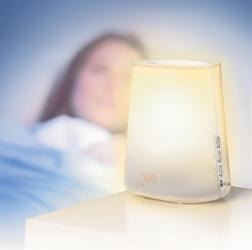 I would suggest the unit is within reach of your bed as it can be a reading light and you can even have the light and say the radio on a sleep timer. Of course you will still need to find the book or magazine in the morning after you doze off, but as the new Philips Wake Up Light now uses energy saving bulbs you are even saving money.

I liked the original when I reviewed it (a little later in the year) but at this time of the year when it is both dark and cold being woken gently by the light before any other sounds in marvellous. If you tend to be rather grumpy in the morning try the Philips Wake Up Light and I suspect you will be more of a pussy cat rather than an angry beast so not only will you feel better but those who come into contact with you early in the day will love it to.

Doing my Internet searches found the Philips Wake Up Light HP3475 at a best price of £54 including free delivery from the first link below. This is less than 50% of the recommended price.

If you can purchase it for near to the above price I am again going to recommend it for the coveted and rarely awarded 5x5 award that the first version received. I still consider this an excellent purchase to make any household with one, a nicer place in the mornings.

The review was published in February and that was the price then.
Rating: