This is nothing to do with NFC as the word Touch might cause you to think. It is a mobile speaker that allows you to place any Smartphone or i device on top of it and the internal speaker output is greatly increased and I mean greatly. 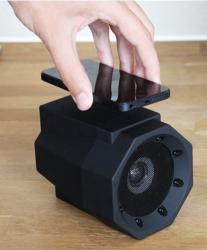 No other connection is required it has an internal solid battery that you can recharge by the micro USB to USB cable provided.

So when you want to share your music simply place your device on top of the Boombox switch it on and whatever is coming from your unit’s internal speaker is greatly increased without distortion.

When I say greatly increased on the occasions I use my iPods speaker I normally have the volume level close to maximum in order to hear the content even when it is within a couple of feet – or less - of me.

The volume level on top of the Boombox is between 20 and 30% and that is often a little loud.

The speaker grill at the front is 8x8cm. There are two invisible sensor points towards the back of the near flat top of the unit.

The rear of the unit has a single horizontal line of connections. DC input (via the supplied micro USB to USB cable), 3.5mm input, blue/red LED and on/off slider button.

There are of course certain things that do not have an inbuilt speaker and for these you would need a 3.5mm to 3.5mm cable (not supplied) and then you can get good sound from them as well.

A single charge will allow you to play for around ten hours. If you need to you can play music while the unit is charging and then only the DC power is used it does not effect the battery charging.

Trying to find a problem I could not, I even placed my iPod Touch in its case and laid that on the Boombox it still worked correctly.

The only thing to remember is that the units speaker must be over the sensors so in the case of my iPod Touch this means at the base of the unit. Place it the other way round and it will not work.

I also tried other devices my Smartphone has its speaker at the top so needs to be placed the other way round on the Boombox, just like my iPod the first stop is to turn the level down .

I tried other devices of various styles and makes all with the same result the volume has to be dramatically reduced.

I have used other devices that increase volume levels – some very expensive – but all seem to have one failing in that while the sound level is increased so is distortion and so the result is rarely satisfactory. That is not so here it is just a good increase in the overall level of sound without the problems normally associated with it.

Given its light weight it is ideal to take with you and then the output from your phone or ‘i’ device is greatly increased without distortion.

A 5x5 award is rarely given but this simple device does a simple job simply and is fully worthy of the 5x5 award.

The Touch Speaker Boombox from Thumbs Up is available from the link below for £24.50 with free delivery.

It is also available at the same price from