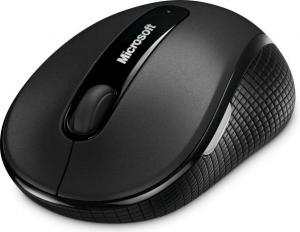 While Microsoft is best known for its software, the company also has a well-establish hardware business.  A long standard element of the hardware side of the business is the development and manufacture of numerous mice.  Joining the ranks of Microsoft mice is the Wireless Mobile Mouse 4000.  As its title suggests, this mouse uses wireless technology for communicating with the computer and has been designed more for the notebook rather than desktop market.  Actually there is no reason to stop you using this mouse with any type of computer including a Mac.

Specific software is provided for both the Windows and Mac platforms and should be installed before linking the mouse to the computer.  On the test system the Microsoft software detected the presence of Logitech’s SetPoint software and was not all that happy to co-exist with it as it might cause conflicts.  As a result, the Microsoft software offered to remove the Logitech software before continuing with its own installation.  Both the removal and installation processes required their own system reboot.

During the installation you are offered opportunities to implement an automatic online checking procedure for updates and also given the chance to join the Customer Experience Improvement Program.  This latter option is used to gather information about your computer and the use of the mouse software which is then passed on anonymously to Microsoft so that the company can improve features.  While both options come with the recommendation to accept them, they do require you to click the acceptance box thus avoiding the possibility that you could accept them without realising it.

The mouse is fairly distinctive with its black rubbed sides and light grey top.  The standard left and right mouse buttons sit either side of the thick rubber wheel that has four-way scrolling capabilities.  Situated on the left side of the mouse is a fourth button which will the default setting of “Back”.  The positioning of the extra button makes this mouse far more suitable for a right-handed rather than left-handed user.  Any of the buttons can be reprogrammed to various commands using the supplied software.  The mouse is powered by a single AA battery which is claimed to provide 10 months of normal usage.

Making use of 2.4GHz wireless technology, the mouse can communicate with the computer via a Nano Transceiver that is small enough to be concealed under a 20p piece.  When not in use the Nano Transceiver can be slotted into a compartment on the base of the mouse in close proximity to the on/off switch that can be used to preserve battery power.  You should be able to get a reliable connection between the mouse and the Transceiver at a range of up to 30 feet.  I was even able to control the mouse from outside my work room with the signal passing through a wall.

Although smaller (remember this mouse has been designed for use with a notebook) than my normal weapon of choice, measuring 60.8 x 102.5mm, this Microsoft mouse had the advantage of fitting comfortably in my hand.  The mouse features the proprietary Microsoft BlueTrack technology which combines the power of optical with the precision of laser.  Being less sensitive to dust, the mouse will work on a variety of surfaces.  I had no trouble using the mouse on a table top, articles of clothing, paper, wood plus other surfaces when my usual mouse mat was not available without any loss o functionality and precision.  Control was accurate and movement smooth.  I would be happy using this mouse with my notebook and desktop system.