In the past I have looked at several products that have been based around DAB radio technology. All these units had been designed for playing on a desk, table, shelf or similar platform as they deliver their audio output through built-in speakers. The Pure Move 2500 is a DAB radio but it does not follow this pattern. Rather it is a portable DAB/FM radio for taking on your travels and requires you to wear a set of headphones to listen to its output. 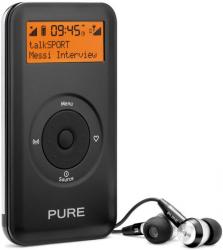 Making up this Pure product are the actual Move 2500 unit plus a ChargePAK M1 1000mAh battery pack, noise isolating headphones with a choice of small, medium and large ear-buds, a power adapter plus the small A6 size Owner’s Manual.  In appearance the Move 2500 unit looks like a smaller version of my iPod Classic.  You have the same combination of a black front with display window and control wheel plus the silver metallic back that has a propensity for collecting finger smears as if they were going out of fashion.

The unit’s size is the real give away as the Move 2500 has dimensions of 102 x 56 x 15mm (L x W x D) which means the main elements are on a smaller scale.  The 40 x 17mm display provides a range of feedback and status information with the actual content depending on whether DAB or FM radio is selected.  Positioned just below the display is a control wheel with the four cardinal points showing Menu, Favourites, Source and Tune options.

On closer examination, the wheel set-up does differ from that used by the iPod.  Whereas the iPod’s four cardinal point identifiers are on the wheel itself, those on the Move 2500 are located just off the wheel.  While the displacement was only small in distance, it was enough to throw me for quite a while as I tried to use the wheel by pressing the label rather than the spot it pointed to on the wheel.

In order to insert the battery pack you will need to remove the back plate.  A micro USB port on the base of the Move 2500 allows you to charge the battery using the supplied mains lead.  The initial charging should be a minimum of three hours with a fully charged battery should give up to 14 hours of air time.

Next to the micro USB port is a standard 3.5mm jack socket for attaching the supplied headphones or you could opt to use you own favourite headset.  Initially I felt the positioning of the 3.5mm jack socket would have been better placed at the top of the Move 2500 where there is already a slider lock switch.  However it was pointed out to me that having the connection at the base would encourage the user to put the unit upside down in a pocket so that it would be the right way up when it was removed.  I’m not totally convinced by this reasoning as I tend to pull the device rather than lift it out of a pocket.

Powering up the Move 2500 for the first time gives you the option to select from the four supported languages of English, French, German or Italian.  While the choice might seem irrelevant, it could prove useful as the Move 2500 supports DAB +.  This feature will allow you to tune into digital stations in other countries which transmit DAB +.  Unfortunately I have been unable to test this feature.  DAB tuning takes place automatically with the process taking up to two minutes.  You can use the wheel to scroll through recognised stations and store up to ten favourites.  When listening to a station, the wheel acts as the volume control.  FM radio works in a similar way although you can use the west and east points of the wheel to seek the previous and next station in the bandwidth.  Again ten stations can be stored as favourites.

Options are available to set a sleep timer, adjust the treble and bass levels of audio plus make adjustments to the display’s backlight and the information being shown.  This information includes battery level, signal strength, current time and selected station.  The FM options also include a choice of stereo or mono reception.

Along with the confusion over where to press, I found the wheel’s controls rather compact with the result it was fairly easy to make mistakes with selection but the reason for this could be the dexterity level of my fingers.  Generally signal strength was fine although I was unable to get a DAB signal when in a centralLondonoffice complex.  A delay of up to five seconds when switching between DAB and FM radio was considered acceptable.  Pricing has been set at £89.99.

Strange as I was able to listen to the test match series against India last summer using this product.
Rating:

Have just purchased and set up my new Pure Move 2500.  I can get 45 digital stations but not BBC R5 sports extra - critical as I am a Test Match special listener.  Any thoughts?