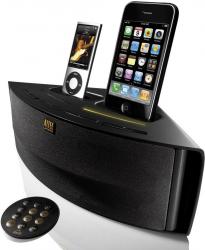 In simple terms the Altec Lansing Octiv 202 is two docks mounted side by side on top of a pair of speakers. However the ability merge playlists is something new and with a downloadable utility you can select what comes from which of the units.

The shape is like a quarter of a round cake. It is 27cm across at the front and 3cm at the back. It is 8.5cm tall without whatever iPods inserted in their docks on the top. From front to back it is 14cm. You can also insert a USB stick in the side and while this will stick out by around 4cm it is slanted back so does not increase on the front figure. This is not in itself a playable item but a means of using the Octiv 202 as a means of charging a USB item.

While the unit is not large it can give out a meaty sound big enough to fill most normal sized rooms. It has a unique circular shaped remote control, this is 5cm across and only .5cm thick rather like a large coin when not being used it is magnetised to fit in the rear of the unit. However I suspect it is likely to finish in someone’s pocket as it is so ‘holdable’.

For those who cannot manage with just the two iPods then there is also a 3.5mm jack input to allow you to use an additional MP3 player on the side next to power adapter input and the USB stick input. The other side is clear.

While the remote is away the unit can still be used as the top of the unit in front of the docks has four rod buttons from left to right on/off, source, volume minus and volume plus. Behind these are three strip LEDs to denote which is the current source a large left one in front of the left iPod, a large right one in front of the right iPod and a small one for when the MP3 player is the choice. The iPods are charged while in situ the MP3 is not.

The twelve button remote four lines of three work with the display on whichever iPod is selected lighting the display to manually change tracks etc. I am surprised that the only instructions are on the box itself, while I worked all this out without any great problems I would have expected at least a Getting Started sheet to be included.

Of course there is a 30 page multi language safety instruction and warranty book. So the flaps of the lid have seven diagrams to explain everything including the ability to use the USB as an input from a phone for extra sounds.

There are two downloadable apps the music mix that allows you to decide which iPod to play the majority of selections from as well as a Rock Alarm but do remember to leave that iPod in the dock for the maximum effect of this app.

Give this a clock, a radio and a small display and to my mind it would be close to perfect. Even MP3 music at 128mbps sounds good through the quality speakers of the Octiv 202. Ideal then for any bedroom or even a bathroom.

It would fit in any corner where most other things will not, a quote from a famous film of a while ago comes to mind ‘nobody puts baby in the corner’ while in the film the lady in question gets her man in life the sound from this unit will make people think the sounds are coming from far better than MP3 files from an iPod or iPhone.

Doing my Internet searches found the Altec Lansing Octiv 202 at a price of around £66.59.