Although its main purpose is to play music and videos, my iPod also comes in useful when testing products such as a speaker system from Logic3. 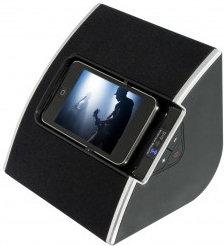 The presence of an “i” as a suffix to a product’s title can certainly give the clue that it belongs to the numerous offerings developed with the iPod market in mind.  Falling into this category is the i-Station25 product from the UK company, Logic3.  The i-Station25 is a speaker system that has been designed for use with the iPod and iPhone products.

Decked out in black with a silver trim, this wedge shaped speaker system measures 154 x 170 x 103mm (H x W x D).  It features four speaker drivers that are capable of deliver 8 Watts RMS of audio output. Positioned between the speaker units is a cutaway docking compartment that can house either an iPod or iPhone device.

The reason for the slightly unusual shape of the Logic3 unit, apart from any possible aesthetic consideration, is so that the i-Station25 product can be stood upright or on its side.  The latter position is so that you can watch movies or videos stored on the iPod device in landscape mode for a better viewing experience.  Whichever orientation is used, the device’s built-in accelerometer feature will automatically adjust the audio stereo output to channel the sound accordingly.

When in its upright position, the i-Station25 has top mounted buttons for power on/off and volume adjustment.  Power and status lights are clearly displayed on the front of the unit.  Included in the box is a remote control unit (109 x 40mm).  This unit gives you the ability to interact with the iPod’s menu system and allows you to adjust Bass and Treble; select tracks; plus mute the audio. 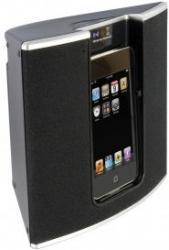 The i-Station25 can be powered either from the mains or by battery.  With the latter option, the unit will require four AA batteries which are not supplied with the product.  The battery compartment is positioned on the back of the i-Station as are sockets for mains power, Line In and Video Out connections.  As access to these connection sockets is partially obscured by the battery compartment cover, you really need to remove this cover before inserting the appropriate lead and then replace the cover.  While hardly an onerous task, it is one that could have been handled better.

A power lead with inter-changeable two and three-pin adapters plus a standard stereo Line In cable are included in the box.  The Line In lead can be used to connect an MP3 player to the i-Station but you will not have access to the various options available from the supplied remote control.  You will need to supply a lead for connecting to a television if you intend to view any video content on a large screen.

While the i-Station25 was capable of producing reasonable audio quality, I did encounter a couple of problems.  There were occasions when the output from my iPod Classic unit paused for no apparent reason.  Pressing the Play control would immediately restart the video or audio track.  This problem appeared to be caused if the iPod was not perfectly seated on the i-Station’s 30-pin connector.  I also noticed that the mains power lead would become disconnected far easier than I was comfortable with, especially if the unit was moved.  The i-Station25 will automatically charge a docked iPod device when attached to the mains even though it is not actually switched on.

Logic3 has priced the i-Station25 at £68.50.  While it has an attractive appearance and can deliver reasonable audio performance, it is let down by the connection problems I encountered.