If you love the type of games and brain teasers you get in newspapers, but can't be bothered with all the high- tech fast paced video games, then this could be the games console for you. 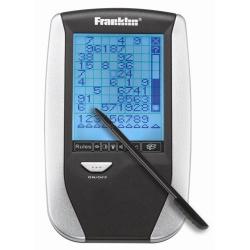 The Brain Partnering Collection from Franklin is a hand held games unit. Very portable and easy to use.

If you love the type of games and brain teasers that you get in the newspapers then this game console could be the one for you. It's obviously not aimed at the teenage market for high visual, mega exciting and interactive games. Rather it will test your intellect through well know games such as Sudoku and Hangman, as well as a large selection of other lesser known word, numbers, memory and logic games.

It is incredibly easy to use and doesn't require you to buy separate games, or keep a track of those pesky little half inch square slivers of plastic!

The visuals are either word based or simple line drawings. The games are played by touching the screen with a stylus.

Heres a few examples of the games:

Faces - a memory game: This game presents you with one face which pops up, then fades. Four more pop up and you have to remember which the first one was. After several of these the game ends and you are given a score. As with all the games you can keep going to improve your score!

Dots - lots of dots move around the screen and you have to count them and press the correct answer of 4 alternatives. Believe me this one is quite hard - cross eyed or what!

Match Point - This is like a blank cross word puzzle. You are given a selection of letters and some blank spaces to fill in words from those letters. Each letter has a score (like scrabble) and you have to find the highest scored words that fit the number of spaces and the letters you have. As the game goes on it gets harder! The unit will score you against the highest possible score words - it beat me every time! It was quite a stretch to my brain bubbles!

Word Find - just like a traditional word search, with some words spelt backwards - you are racing against the clock for this one.

There are many other games including those you will recognise like Hangman and Sudoku.

This would make a nice little compact travelling game - either for long journeys, or on a commute. I found it's also provided me with a few brain teasers in between cups of coffee and writing articles! Something to get the old grey matter going without popping out to buy the daily newspaper.

It may well also appeal to those who don't really like new technology too much and can't be bothered with all those fancy games out there!

The unit keeps a track of your previous scores and tells you if this time it's your highest score so far or not.

The Franklin Brain Partnering Collection is available for £49.99 from Amazon :

I`m always on the lookout for this teaser-type product-sis is badly partially sighted, but likes stuff like this. But the graphics look ever so small? Wonder is there anyway to make the text/ graphics any bigger? That aside, looks pretty good overall.