Normally you would get my opinion as an experienced computer user but a very basic musician. Here something different the view of a very experienced musician but almost a computer novice. 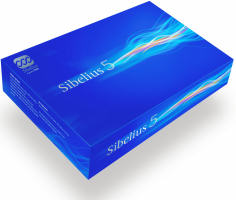 My friend Don has been a semi pro musician (keyboard player) for more than forty years. He has only a few years computing knowledge and only a few months with Broadband. He had some software by Finale -Print Music- but he always wanted more than it could give, and Sibelius will import Print Music files.

So around five months ago I gave him Sibelius 5.1 and he started work (remember he knows music well but as far as computers he is defiantly a 'silver surfer')

The agreement was I was at the end of a phone and after a few months (two months ago) he would download version 5.2 when it became available and install it over the top of version 5.1

I meet Don occasionally at a local gig, we are both jazz fans although he plays more straight ahead music. Often we have little chats about a problem. Sometimes, assuming it is Windows based, I can help. Sometimes when its Sibelius based I can't. Don would then contact their technical support by email. The responses he has had have been quick and always positive. Having support in the UK is a plus as is having musicians on the helpline.

At the end of the test period I went over to his home (sorted a couple of Windows problems) and he showed me things that Sibelius can do that I would never dream it could. Also how he gets it to do what he wants it to do.

Scenario One : Don requires more than one tune to be printed on a single sheet, especially when doing sing-alongs. Not only can this be done in Sibelius but it is often necessary to change keys from the original - this is a work of seconds for the software. Adding lyrics is something he did not have when he transcribed items by hand - now it can be added easily. Do you get the idea that Don likes it? 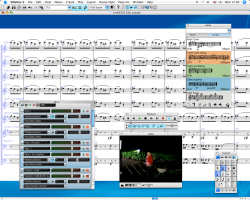 Although Don had a AMD Athlon 1800+ and XP SP2 he only had 256MB of RAM and although Sibelius would run it was slow. The instructions say that 512MB is the minimum. Don upgraded and added 256MB and now things are a lot quicker. The initial loading of the program takes 25 seconds but any music loaded in after that is almost instantaneous.

Don has a music library that goes into 1000's of tunes and is a marvellous keyboard player. However what he wants is everything in a single volume and already he has transferred a lot of the music - he has three of even four tunes per page. Seeing his set-up he uses keyboard and mouse plus a mini music keyboard because he finds it easier to enter notes on a keyboard and although he could have his main keyboard connected to the PC he would need a different shaped room to accommodate this.

He has several sheets of short-cuts typed above his desk and he would be the first to admit he is still a novice. Often things do not go as required but he is sensible and providing he does not save he will be no worse off than when he started what he was doing.

Sibelius comes with two manuals and Don cannot praise these enough. The 660 page reference manual sits by his desk and is already well thumbed - the 164 page handbook is nearby. His current stumbling block is with Photo Score Lite that will not open PDF files - I have read the paragraph that says it will not do this. But if that is so why is that option not greyed out? No doubt another email to technical support. As with any scanned image the better the copy you start with the better the result but Don reckons that if you get less than three errors then it's working well. I know when I reviewed V4 (at the start of 2006) it did not work at all.

Don has noted that a couple of extra things now work in 5.2 that did not in 5.1. Again not a conclusive review but you want to know about this software from a user's point of view and Don loves it.

Doing my Internet searches found Sibelius 5.2 at a best price of £118.50 for education from the first link below. The second link is the end user price £482.28. Lots more info from the final link.