Meeting up with an old acquaintance can sometimes be an enjoyable experience but that is not alwsys the case. 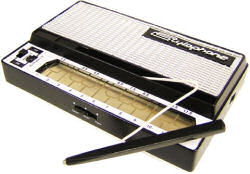 Originally appearing in the late 1960s, the Stylophone was launched on to the marketplace as "The Electronic Organ in your Pocket".  For those young enough not to have come under the influence of the initial advertising campaign, whether television, newspaper or other media, the Stylophone campaign was headed by Rolf Harris, a popular entertainer of the time, who was capable of playing some rather unusual musical instruments, many Aboriginal based.  As can often happen, the circle can fully turn and a device can reappear, sometimes with a make-over to suit modern consumers, for a second attempt at popular acceptance.

In the case of the Stylophone, the basic design concept and look of the device remains the same.  Even the packaging looks remarkably similar to that portrayed in the original advertisements that I have been able to track down.  There is, however, at least one new additional feature to this updated version of the Stylophone which I will return to a little later.

Measuring 158 x 97 x 38mm (W x H x D), the Stylophone unit features an electronic keypad which responds to the touch of a stylus.  The keypad is positioned beneath a stylus housing compartment and the speaker unit concealed behind a silver plastic grill.  The 104mm stylus is permanently attached to the Stylophone by a thin lead which gives 108mm of play (no pun intended).

Buttons, positioned alongside the keyboard, provide power and vibrato control.  A three-positioned toggle switch on the base of the unit allows you to select from three Stylophone types of sound - actually these sounds just vary in their pitch.  A volume wheel is situated on the right side of the device.

In addition there are a couple of sockets on the left side for connecting a headphone set and linking an MP3 player using the supplied lead.  While I was initially unsure whether the original Stylophone had a headphone feature, checking the packaging revealed that it did form part of the original specification, the MP3 feature is definitely new.  Unfortunately the linking capabilities of the review unit produced extremely poor audio quality.  The same complaint could also be levelled at the volume wheel which tended to cut out when set at various positions while attempting to produce recognisable music from the keypad.

It was equally evident that there were problems with the build quality of this device.  The back of the unit was remarkable easy to remove, it even fell off itself on one occasion.  Checking the insides revealed that a number of the leads and connections were held in place by the use of selotape which calls into doubt the construction process used to create this product.  A comment by a member of my family, that this was the kind of product that you might find in a cheap market, seemed relevant.

Overall I was disappointed with the return of the Stylophone.  Young children might get some enjoyment out of the product through its music making ability, however limited, but parents will probably find the rather tinny sound to be annoying and they will certainly worry about how easy it is to expose the electronic elements.