At the start of 2008 GE launched a range of cameras into the UK. While some were on show and have been reviewed during the year as they became available. Not even a dummy mock up of this unit was available at the time, finally it has become available, was the wait worth it? 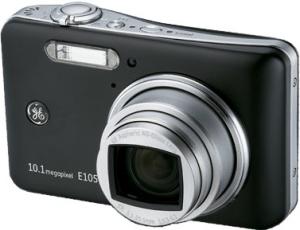 A lot was made at the initial event of all cameras sharing the same manual. Well this unit does have the same ‘Superior Features’ sheet featuring Face Detection, Panorama Stitching, Smile Detection and Blink Detection but while the manual itself is in five languages it varies quite considerably simply because the controls are in vastly different places. The reason, this is an almost totally touchscreen camera.

The front has the covered lens with the flash at least 2cm above and to the right. The right side has the wrist strap anchor point and the covered A/V outlet. The base has HD connection socket as well as the solid battery bay that also houses the SD card slot and finally the tripod screw. The left side is blank. The top has the on/off button, the shutter release with the wide angle/telephoto control around it, finally the button to switch between taking and viewing photos.

Normally the back has the TFT and a range of controls including a wheel and the ubiquitous five position joystick. Not here as the back has only the 6x4.5cm TFT that’s it.

The camera is 9.5x6x2.5cm the latter figure the width can increase by up to 4cm when the lens is fully zoomed. The camera weights 175grams and mine was silver in colour, there are four other colours available.

10.1 mega pixel is not huge by today’s standards but it is certainly not entry level either, nor is the 5x optical zoom. While a lot of cameras cannot offer 28mm wide angle lens this is not that rare, the HD/HDMI output is somewhat rarer.

Unless you are a total novice the basics of the 28 pages of the manual that are in English will not be required. Find the solid battery; insert it in the charger and within a couple of hours it should be fully charged. Insert it in the base of the camera along with an SD card (not supplied) and push the on/off button follow the prompts to set time and date and you are ready to take your first images.

All the adjustments are made on the TFT by a finger tap on an icon to reveal another menu relative to that icon. The obvious problem will be marks on the TFT and perhaps for those with finger nails even the possibility of scratching the TFT.

As far as modes go there are six Auto, Manual, Movie, Panorama, Scene and Stabilization. The scene mode has thirteen options and this is where the Macro mode is accessed.

There are seven possible shooting modes each has three compression modes so 21 possible ways of filling your memory card. These are 10MP, 8MP, 5MP, 3MP and VGA there is also a 16:9 and a 3:2 offering. A 3MP image should give an excellent A4 printed image, or course should you want to work on just part of the image then one of the higher resolutions will be required to avail pixelation.

The flash can be a little overpowering when close and it does tail off quickly after around three metres. There are six flash modes, Auto, Red Eye Reduction, Slow Synchro, Red Eye + Slow Synchro, No Flash and Forced Flash. My advice is to try them all but trust Auto until you are sure of the results you will get. The same can be said of all the Scene modes with perhaps the exception of Macro as that becomes clear when trying to take close up shots.

There are nine other features hidden behind the settings mode and these include a quite nice Continuous Shooting Mode that works well giving several (three by default) rapid shots.

This could well be quite a nice camera but with the limited testing time I am unsure about several things like the movie mode that offers a rather nice 1280x720 mode as well as the more normal 640x480 and 320x240 each can be in 30, 25? or 15FPS, however only the supplied software can interpret some modes.

Doing my Internet searches found the GE E1050TW at a best price of £112.99 including delivery from the first link below.

It looks good and feels good until you take it outside into daylight when it is almost impossible to see the touch screen even in the dullest light.  In bright sunlight it is useless.  The camera does have a screen brightness adjuster but it makes little effect.  Very disappointing.
Rating: