No matter how careful you are, or think you are, your Windows-based system will tend to slow down as it struggles to cope with the demands you place upon it. 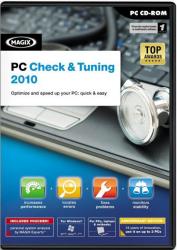 While you could attempt to carry out various spring cleaning sessions and tune up operations on a do-it-yourself basis, this could be time consuming and involve tasks beyond your skill level.  An alternative method would be to use the expertise of others and invest in software designed to carry out this type of operation.  One such product is PC Check & Tuning 2010 from MAGIX which offers to analyse your system, solve problems, increase performance and free up disk space as part of its functionality.  According to MAGIX, this product is based on the company’s 15 years experience in supplying customer technical support.

As is usual with MAGIX products, you will need to activate the software by entering a serial number – in this case the serial number consists of 30 characters.  There will also be an option to check online for any updates to the MAGIX software and download any that are available.

The program’s main interface is headed by a list of categories for the various tools plus options to check your PC and fix all problems.  The first time you open the program you will be advised to run the Check PC options.  This will look for and list how many problems have been found that relate to the system start, garbage data, Internet history and the swap file.  You will be encouraged to let the software fix these problems.

However, as I have mentioned, this section only advises you as to the number of problems.  You are not told what these problems, or suggestions for improvement, are.  You are left completely in the dark as to what alterations the software intends to make.  It has to be said that this module is rather over-enthusiastic in its approach to cleansing.  Combine this to the lack of supplied information and you can see that problems could occur for the unwary.

When run on the test system some entries were removed from the system start routine that were required on a daily basis.  One particular item concerned an information gathering service I subscribe was removed thus causing problems.  Fortunately, before making any changes, the software does give you the option to create a Restore Point which can be used to undo any alterations that may subsequently cause problems.  I put this feature to good use.

Switching to the category based approach, you can target areas that include increasing performance, freeing up memory, securing data and configuring Windows.  The Increase Performance category features a number of tools including one that offers to optimise the system start.  Unlike the procedure mentioned earlier, this one lists all the items that form part of the start routine and allows you to cherry pick in the same way as you would when using MSCONFIG, admittedly working in a more attractive interface.  You can deactivate items and reactivate others that are not currently being included.  Why this approach was not adopted in the first place is beyond me.

Also included in the Increase Performance category is a Clean Registry tool.  When run on the test system, this reported that there were over 2800 errors that needed fixing.  While the software had no problem in identifying these errors, it was unable to carry out the necessary editing in order to remove them.  The only response forthcoming from selecting the Edit feature was a pop-up message stating “.The back up directory does not exist, create a new directory”.  This message proved to be of no use whatsoever as nothing I did had any effect.  The misplaced full stop at the start of this message was not the only grammatical mistake noted as I spotted at least one other with “their” being used instead of “there”.

Checking out the product’s driver download service, it was able to offer just three new drivers for a system that is several years old.  Of these three items, one of them was for a MAGIX product.  Other similar services found many more drivers that needed updating with this particular system.

While PC Check & Tuning 2010 does have some useful features, these are not unique to the product and are often handled better by other titles.  Overall I was disappointed with this product.  It has failed to come even close to replacing my preferred option of using the superior TuneUp Utilities developed by another German company.

I have found useful the above information. I think One needs to be aware of at least basic functionalities of a computer system. I also would like to add that windows basic tools/utilizes are needed to be used after a reguar interval (Apart from a Good antivirus or anti malware or any other pc protection too). Sfc /scannow, check disc etc.

I have also written in depth in the following blog.
www.pcdocpro.com/blog