Do you fancy waking up in the morning with sunlight streaming through your bedroom window as your curtains open automatically? 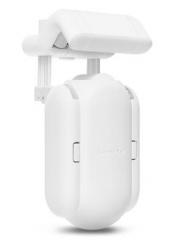 Over the past few years many homes have undergone a make-over.  I should point out that I am not referring to decorative make-overs, however expensive or inexpensive they may be, but those of a technology kind which turn our places of residence into a smart home through the addition of a device or several devices.  You may have one or even a number of these devices controlling different aspects of your home.  But can you guess what controlling feature may be the next cab off the rank?  I know I was well wide of the mark when faced by this question.

The answer, that's the correct one and not my wide of the mark guess, is that of the SwitchBot Curtain which, as it title might indicate, is a device that can motorise the opening and closing of your window curtains.  Unlike some other devices designed to carry out this task, the SwitchBot Curtain is a device that can be added to an existing curtain arrangement rather than being built into the curtain arrangement.  To ensure that this product covers a variety of situations regarding the different types of support track for hanging the curtains, there are SwitchBot Curtain devices for a Rod, U Rail track or an I Rail track.  As my curtain rails were of the I Rail variety, this was the version of the product that forms the basis of the review.

The I Rail kit consists of the main body of the unit, which does the actual pulling of the curtain in the desired direction, hook pair, clip unit, type C USB cable and a small User Manual.  You will need to download the SwitchBot App, available for iOS and Android users, which provides your control unit.  The app will allow you to sign in or create an account for handling your details.  You can then add your device, or devices, from those supported by the app.

When setting up the SwitchBot Curtain device, you can select the appropriate curtain track plus opt for a left, right or opening from the middle, plus go with a slow or fast movement with the latter being slightly noisier.  You can also name the location of the curtain to distinguish it from other curtains in the home.  Depending upon the number of curtains in use within the home, a separate SwitchBot Curtain will be required to control each one.

To complete the set-up between the SwitchBot Curtain device and its attached curtain, a pairing process will need to be completed.  The actual physical process of a-fixing the SwitchBot Curtain should be rather straightforward.  Information on the product's packaging indicates this should take around 30 seconds.  But this does not take into consideration any furniture elements or the personnel involved.  In my home, impediments regarding the need to move furniture and my bad back condition had to be overcome, resulting in the task requiring several minutes.  It was during this process that I noticed, when holding the SwitchBot unit upside down, that it had the appearance of a Star Wars type robot.

As the SwitchBot device requires power to perform its task, this can be provided by a choice of methods.  You can either charge the SwitchBot's internal 3350 mAh Lithium-ion battery, claiming to deliver up to 8 months of power depending on use, or add a SwitchBot Solar Panel unit to soak up sunlight and deliver the necessary power to a connected SwitchBot unit.

When making use of the SwitchBot Curtain capability, you will need to be holding your smartphone in order to control curtain opening and closing movement via the app.  However for those, such as myself, who do not wander about the home cradling their smartphone, mine remains in a pocket where I am unlikely to misplace it, there is alternative methods of controlling the SwitchBot Curtain unit.  I preferred using a SwitchBot Remote which can be attached in a convenient location, such as a doorway, where it could be activated with a press when entering or leaving a room.  Curtains could then be opened or closed as required automatically.

A second alternative would be to include a SwitchBot Hub Mini unit to the system.  This would give you a greater range and width of controls.  You even get support for voice control using Alexa or Google Assistant support.  Using the app you can set schedules for the automatic opening and closing of curtains.

The SwitchBot Curtain can certainly relieve you of the task of physically closing and opening of your curtains within a single room.  To get the optimum service from this product, you do have to decide how best to use and make the relevant purchases to support your chosen system.  Checking Amazon for prices of the individual elements, mentioned in this review, revealed that the SwitchBot Curtain, available in black or white, is priced at £85.  The Mini Hub has a £29 price tag, the Solar Panel would set you back £19 with the SwitchBot Remote being listed at £25.

SwitchBot Store - Your Simple Switch to a Smart Home (switch-bot.com)