With the same name as the company which designed and manufactured it, the SITPACK is a collapsible and portable seat. 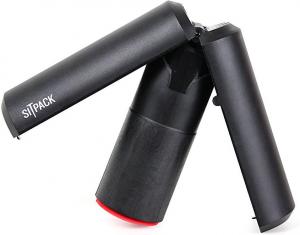 The original concept for the SITPACK was conceived in 2010 at the Roskide Festival in Denmark.  Tired of standing while waiting for the next act to appear or sitting on the churned up ground being trodden on and surrounded by litter, the gem of an idea of a shooting stick like device, that could be folded away when not required, began to emerge and germinate in the mind of a college student.  After becoming the 4th most funded Kickstarter campaign on the Japanese crowdfunded platform, Makuake, the SITPACK was born,

Available in a choice of Pearl White, Pitch Black, Easy Blue, Power Pink and Black Camo, the SITBACK is basically a stick on which you can park your backside while waiting for an event to happen.  Initially arriving in the compact state of a stubby cylindrical tube, the SITBACK has dimensions of 174 x 67 mm (Height x Diameter) and weighs 568g giving the device a sturdy feel and confidence as to its ability to hold your weight.

The size and weight of the SITPACK is such that you are unlikely to want to carry the SITPACK in a pocket even of the patch type.  However you could slip it into a bag until it was required to ease any discomfort that might arise from standing around too long.  A built in carry handle for a future model could help with portability.

When required the SITPACK can open out into a shooting stick-like device made of polycarbonate.  The two sections of the outer shell combine, and are held in position by a collar locking mechanism, to form the seat element of the device.  This curved seat measures 33 x 11 cm.  The innards of the device, made up of seven telescopic sections, can be expanded up to a height of 87 cm.  You have a choice of locking the section in place with a single grip and twist method, which will probably be the chosen method for the more accomplished user, or tackled on an individual basis for each section.  This latter method allows for the device to be set up with different heights to suit the size of the person using the device.

Rather than the pointed end of a standard shooting stick that could prove a handicap on concrete and similar hard surfaces, the SITPACK’s floor contact is handled by a circular red rubber button.  This does provide the device with firm support on various surfaces.  However the button does have a tendency to, over use, become slightly detached from its housing which does make it difficult when returning the device to its cylindrical format until you screw it flush to its holding segment.  This problem occurred more than once during my testing of the product.

Along with the convenience of being an easily portable seating device, the SITPACK comes with some impressive claims regarding how it can help posture by encouraging the user to sit with a straight back and head held high.  In this position it is claimed that both breathing and circulation are optimised.  Bones and joints should be correctly aligned to ensure muscles are used efficiency and help reduce or prevent the abnormal wearing of joint surfaces.

The SITPACK induced good posture is also claimed to help reduce fatigue as muscles are put to better use while preventing neck and back pain.  As somebody who does suffer from back pain at regular intervals, this could be a positive factor although my backside might not agree as sitting longer than a few minutes prove uncomfortable.  It is my understanding that a padded seat version is on the company’s road map.

As mentioned earlier, the SITPACK is constructed from polycarbonates made into injection-moulded parts that make use of patent pending folding and telescopic technology.  The locking mechanism feature in the SITPACK is included inside the tube itself.  The manufacturing process required to product this device has brought together heterogeneous engineering competences in statics, mechanics, polymer materials and injection moulding tooling with SITPACK being the result.

Priced at £45, the SITPACK is available from www.sitpack.dk and online traders such as Amazon and Firebox.