Can you solve the mystery of a fire at a popular theatre? 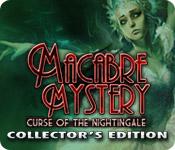 Accidents can happen but maybe it was deliberate and caused by some nefarious activity.  But whatever the reason, the Nightingale Theatre caught fire 40 years ago.  Maybe it was not burned to the ground but it was so badly damaged that it was ceased to be used.  That is until now when you receive a letter from your grandfather Wilson who had not been seen since the night of the fire.  Your grandfather announced that he was reopening the Nightingale and would like you to attend.  Included with the letter was a golden ticket invitation to the event.

This is the opening sequence dreamed up by Blue Tea Games for the Macabre Mysteries - Curse of the Nightingale game.  I have been looking at the Collector's Edition which comes with a number of bonus items to enhance this Hidden Object Adventure offering.  These bonus items include a bonus chapter, concept art, music tracks, wallpaper and a Strategy Guide.  Unlike other games of a similar type, Blue Tea Games feels you need to prove your worth by completing the main game before being granted access to the bonus items.  The one exception is the Strategy Guide which is immediately available from the gaming screen.

Prior to setting out on this adventure, you can create profiles to record the progress of different players and make some adjustments to the gaming environment.  You can set the volume levels for music and sound effects plus select to play the game in full and wide screen mode with a system or game cursor.  Blue Tea Games feels this title is challenging enough not to require varying levels of difficulty.

Arriving at the grounds of the Nightingale, your view of the scene will be overlaid by various tools across the bottom of the screen that could prove useful during the game.  Taking up a central position is an inventory holding the items collected for use in the game,  To the left of the inventory are Hint and Vision features.

The Vision features allows you to repeat certain cut-scenes that appear in the game while the Hint feature works in two different modes.  It can be used to pinpoint a yet-to-be-found item in Hidden Object game play but changes to show where an item in the inventory in Adventure mode can be used as you go about solving the mystery of the Nightingale Theatre.  You also get assistance from the mouse cursor which changes shape to indicate when different actions are possible.

Mounted to the right of the inventory are shortcuts to the Strategy Guide, Map and Option features.  As you might expect, the Guide can be used to lead you through ways to solve the game's problems with screen grabs and step-by-step instructions.  The Map splits its functionality into three areas.  There are sections showing details of the game's characters, objective hints and a map showing your current location and where tasks need to be completed.  I mention the Option's shortcut as this is the route to take if you need to close the program when needing to take a break.

As you move around the ground covered by the Nightingale Theatre, you will encounter ghostly experiences as the building releases its memories of past incidents and characters.  When dialogue is involved, this will be delivered in text format and spoken by a voice actor.  You will also need to find morphing objects, solve puzzles and several Hidden Object scenes to complete.

Two different formats of Hidden Object game play are used in this game.  With both make use of a cluttered scene approach, the collectable items are presented in a different manner.  In some cases you will be presented with three containers, each holding a number of sections of an object.  Once found, the sections come together to form a required object.  The second method involves complete images that you will need to find.

The game contains enough content to provide many hours of game play that can be challenging.  There are well-designed scenes and some eye-catching animations.  As mentioned earlier, this game can be downloaded from the Big Fish Games website where it is priced at £10.80.  The game requires a 1.0 GHz processor with 512MB of RAM and 580MB of hard disk space running Windows XP and later.