At a time when a great many cellphones are getting smaller, the Doro PhoneEasy 410gsm presses the, slightly larger, buttons and offers what a great many users -- especially the more mature -- want. 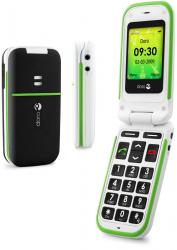 Doro is a Swedish manufacturer which, rather than directly competing with the better known names, carefully addresses niche markets. To that end, hearing aid compatibility, an emergency call facility, Bluetooth, two-way peakerphone and an FM radio are among the features incorporated into the 410gsm. After all, to someone who doesn’t use a phone very much, the radio may be the justification to carry the phone at all times.

It is a triple band clamshell phone weighing in at around 100g and has a non-slip surface that fits comfortably into one’s hand.. As one opens the phone the colour display lights up as do the keys on the large keypad. The size of the keys and the clarity of all the characters are a boon to anyone with poor sight.

It seems that Doro has put a lot of effort into making the phone easy to use both in terms of the size of lettering and contrast that enable the display to be easily read and the way that it is easy to navigate through the various menus to access the wide range of facilities. As can be appreciated, a great many of these (but not all) are essentially the same as many other GSM phones. These include SMS and MMS messaging and a 100 entry phone book.

The alarm can be set to be a one-off or a repeater that can be programmed to wake you up every weekday but not (say) Saturday and Sunday. By the way, the alarm works even when the phone is switched off.

Tasks set up in the calendar, at a particular date and time, can have associated notes of up to 35 characters. There are also games and a calculator.

When headset (supplied) is plugged in to provide hands-free answering, using the answer/terminate button on the headset cable, the internal microphone is automatically disconnected. With the fm radio one can step through the channels or, alternatively, set-up up to 9 presets. When the FM radio is in use the headset also acts as the antenna.

When the emergency call is held down for about 3 seconds or pressed twice in rapid succession an audio alarm sounds Then, the phone will send emergency SMS messages to those numbers on an emergency call list. The phone will then dial the first number on the list. If that call is not answered, it will try the next number.

At the unlocked price of around £150 the 410gsm is not cheap. However, it is a well designed phone that is easy to use. This could well make it a good choice for anyone who wants versatile and simplicity. In addition, it would make the ideal present for someone -- possibly an elderly relative living alone -- who is a bit of a Luddite and who says that they don’t want (and will never use) a cellphone.

I recommend the Just5 cell phone more as a simple and basic cell phone for technophobes, seniors, kids, and disabled. My elderly mom is using this phone with confidence and convenience because of its simple design and basic functions. Plus, she can take advantage of PERS features to allow her to call for help immediately during emergencies. I found this phone at www.just5.com.
Rating:

Another great phone for seniors is the Just5 phone. It is not only affordable but also has features that will make life easier for seniors. Check out its personal emergency response system, large buttons, amplified sound, and bright display. Visit www.just5.com for more information.