This is another in a growing band of phones with a 5mega pixel camera. While I doubt this will ever replace a digital camera for a photographer but, as everyone always seems to take their mobile phone with them it can be where a digital camera is not.

Available from
The Carphone Warehouse
from £20/month 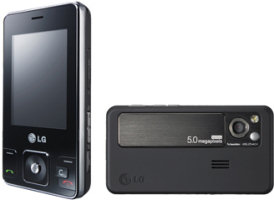 This phone certainly has a solid feel. It is 10x5x1.5 when closed and this increases by another 3.5cm when the screen is moved up to reveal the 12 key keypad. The phone weights 90grams.

The screen on the KC550 is 4.9x3.8cm and is clear and easy to read. The first unusual thing is a slide on the rear that hides/exposes the 5 megapixel auto focus camera lens. When pulled down it exposes not only the lens but the flash and the self image mirror. This last feature is something that must cost the manufacturers pennies to include but allows lots of people to get good images of themselves in a group shot. However do beware of taking images in this way in less than perfect light as the flash is very bright and when only at arms length it can certainly dazzle.

Looking at the various connections, the left side has a cover to hide the power input and the headset outlet. The right side has volume + and -, the camera shutter button and a bung over the SD card slot. The camera is behind a slide on the back and the corner just above this is an anchor point for a wrist strap.

Just below the screen are two soft buttons, the normal green 'dial' button and red 'hang up' with a cancel button added between the right soft button and the hang up one. This looks almost like an afterthought. Between the left and right buttons is the ubiquitous five position joystick.

I expect I am one of the few who ever turn a phone off; boot up time is around twenty seconds, a lot faster than most, while shutdown is a tad over five seconds.

The home screen displays signal strength, Bluetooth on, speaker on, battery state and time. Below this the service providers name. Most of the display shows a simple flash display that you can change should you wish. The bottom of the screen shows time, day and date with Menu and Contacts on the soft buttons.

The menu button has twelve sub screens that you can get to by using either the keys or the joystick. Games & Apps, Call History, Organiser, Multimedia, Messaging, My Stuff, Profiles, Contacts, Tools, Browser, Connectivity and Settings.

With some phones the reception in my office is one or two bars but this offering gave four bars using my Sim card so the difference is nothing to do with a different service provider. I also suffer from - on occasions - the ability to be holding a conversation with myself. Meaning I am in the middle of a conversation and the other party goes quiet and the hello, hello produces nothing, this never happened with this LG phone.

The camera can capture up to ISO800 and there are not a lot of mobiles that can take an image with that little light but of course you do need to hold the unit very still or better still rest it on something solid. While it does have an image stabilizer these can only do so much.

For video this can capture 30fps at 720x480. The MP3 player is good and should you want it the FM radio works okay providing you have the supplied earbuds with you as these act as the aerial.

Just a word on some games provided called M-toy devolved I am sure from the success of the Wii where phone movements allow you to play darts, this is one of six games using this feature. Remembering the various problems people have developed as a result of playing Wii games I am not sure if this is the right direction, as a rule most phones do not take kindly to being thrown around.

The KC550 is available with contract from The Carphone Warehouse on the T-Mobile network for £20 per month, and £25/month on other networks. Details here.

As always finding Sim free prices is not easy especially for very new phones. It is available on Amazon for £123, including shipping, on the following link :

This LG KC550 is only capable of 15 fps at any resolution. Beware!