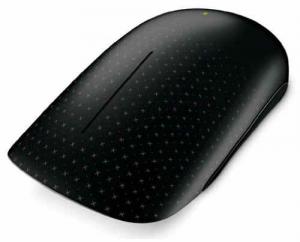 While Microsoft would be only too happy to wave a fond farewell to Windows XP, there are many users who are determined to continue using this familiar friend on their computer.  As the end of mainstream support for this operating system has failed to encourage these XP fans to switch to Windows 7, maybe Microsoft has decided to offer a different type on inducement with the launch of the Touch Mouse which will only run on Windows 7 and subsequent versions.

Unlike other mice I have looked at and used, which tend to arrive in a bubble pack, the Touch Mouse comes in what appears to be a presentation box with a flip out panel displaying the mouse’s special features in a variety of languages.  Included in the box with the ambidextrous mouse are a nano receiver, USB extension lead to help ensure there is a clear line of sight between the mouse and the receiver, two AA batteries and a slim set-up guide.  You also get a couple of sticky pads for securing the extension lead in position.

No doubt you will have noticed the lack of any mention of software with the contents of this package.  Microsoft, in its wisdom, has opted to rely on the user to download this element of the package.  This process should start automatically but I was forced to log onto the Microsoft site manually in order to select and download the appropriate driver software.  At the conclusion of the software installation, an interactive demo will lead you through the two and three finger gestures as well as using your thumb with this mouse.  You can practice these movements as many times as you want until you feel confident with the actions.

The Touch Mouse is larger than my regular rodent companion but not to a degree where it feels uncomfortable in the hand.  The smooth curve of the mouse’s black top does not appear to have a standard left and right button but they are there although they do require more pressure than I have become use to with a tradition style mouse.  A scroll wheel is conspicuous by its absence and has been replaced by a 3.5cm slit in the top of the mouse.  Either side of this slit, and extending to the edges of the mouse, is a pattern of small crosses that indicate the capacitative touch-sensitive area of this mouse.  Any gestures will need to be carried out on the portion of the mouse.

Although generally out-of-sight, the ceramic white of the mouse’s base looked at odds with the rest of the moue’s appearance.  The base did feature an on/off switch to help conserve the two AA batteries that power the mouse.  There is also a small slot on the base into which you can insert the nano receiver for safe keeping when it is not required.

As already mentioned this mouse supports finger and thumb gestures.  A the-finger swipe towards you will bring up windows for all running programs while a three-finger swipe in the opposite direction will minimise all applications.  Sliding two fingers to the left or right will attach the current window to that side while a thumb movement will let you move through web pages.  Using a single finger you can replicate the actions of the missing scroll wheel.  While the gestures worked, they do take a little getting use to although the movements are intuitive.

While Microsoft deserves praise for its work on the touch features of this mouse and the inclusion of the USB extension lead, there does appear to have been less emphasis placed on other important aspects of a mouse.  Both moving the mouse cursor around the screen and using the left and right mouse buttons were sub-standard especially when you consider the price tag of £70 that has been placed on this device.  The attractions of the touch capabilities featured on this mouse were not strong enough to tempt me to abandon my traditional mouse.