Recently I reported on the diskGenie, an external hard drive from iStorage. This device adopts a "belt and braces" approach to security by incorporating AES 256-bit encryption with a PIN Number being required to gain access to the drive. In fact without the correct PIN number being entered, the drive would remain invisible to the operating system. 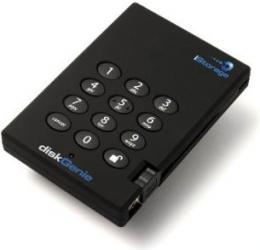 My original review was based on the 250GB model while the highest capacity available at that time from the company was 500GB.  Since then iStorage has added to its range of external drives.  One of the new models is the 640GB diskGenie which is currently attached to my computer system.  The actual drive is encased within a black rubberised substance with added protection comes from the 16-point, omni-direction shock mounting system.  This combination should keep the drive safe from accidental damage during transit.

Identical, to the naked eye, to the original model, the diskGenie 640GB has dimensions of  123 x 84.5 x 19mm which means it could fit in a pocket without causing too much of a bulge.  A padded carry pouch is provided with the drive.  The drive has the same 4 x 3 layout of the alphanumeric pad adorning the top surface and the 4-inch USB lead is still permanently attached for linking to a Windows or Mac system.  When the drive is not in use you can slot the USB lead into a channel running along one side of the unit.

The diskGenie arrives preformatted as NTFS for immediate use with a Windows system.  Mac Users will need to initialise the diskGenie before it can be used.  However, in both cases, you will need to enter the default PIN number before you can gain access to the drive.  It is advisable to change the default PIN number to one of your own choosing – but do not forget it otherwise you will be denied access to the drive’s content.  Instructions regarding this process are set out in the accompanying Quick Start Guide.  This process involves the use of various key combinations, with feedback being supplied by different LED colour flashes, before you enter and confirm your new PIN number.  Up to ten different PIN numbers can be set up for individual users.  PIN numbers need to be between 6 and 16 characters depending upon the level of protection you feel is suitable for each user.

While I did have some problems getting the device to accept and recognise new PIN numbers with the earlier diskGenie model, this time everything ran smoothly.  I was able to change the default PIN number without a hitch and even set up a number of dummy PINs for testing purposes.  The procedure does require you to hold down key combinations for a set time but the required keys are in close proximity to each other.  Maybe it was a case of practice makes perfect or perhaps some fine tuning had been carried out by iStorage in the intervening period.

Once the PIN number has been entered then the diskGenie will appear in My Computer and you can use the device as you would any other external storage drive unit.  You can create, add, copy and delete files/folders plus use features such as drag & drop or copy & paste to transfer files from one device to another.  Included on the diskGenie is a PDF version of the User Guide.

As with the previous 250GB model, I ran a series of tests using both documents and MP3 files to test the read / write capabilities of the 640GB diskGenie.  Copying 380 document files, spread over two folders and consisting of 12MB of data, to the diskGenie took 18 seconds.  This timing was almost identical to that achieved by the earlier model.  Reversing the process requited just 11 second to read the data.  This was slightly better than the 250GB model result.  A similar improvement was achieved when copying 775 MP3 files spread over 51 folders and made up of 2.18GB of data to the diskGenie.  This task was completed in 3 minutes 12 seconds.

These timings, while hardly record breaking, are acceptable.  Unfortunately, as with the 250GB product, moving the MP3 data from the diskGenie to an internal hard disk was painfully slow.  It took 11 minutes 5 seconds to complete the task.  Repeating the process I was able to notice that the extended time was down to one album with a particular track being the main culprit.  Incidentally this track was entitled “Move On” which seemed appropriate.  Copying this album on its own took 18 seconds in either direction.

Included in the box, along with the diskGenie unit and the carry pouch, is a USB Y-cable which can be used as an extension lead or to provide extra power when connected to a laptop.  The diskGenie is priced at £199 which seems rather pricey.  You could easily pick up an external hard drive of the same capacity for less than half this figure.  However you do get the additional security which should appeal to some business users.

I received a diskGenie 500gb yesterday by mail and encountered immediate problems. It plugged into my Windows7 laptop without difficulty but it refuses to let me change the password from the factory setting. My iMac (Os 10.6.8) did not recognise the diskgenie at all when I plugged it and nor did my old iMac (Os 10.2). Because of the weekend intervening, I won't be able to talk to iStorage until Monday but it's been a disappointing introduction to this drive. I'll update this comment after talking to their technical support.