As befits technology, its sphere of influence continues to spread through the use of different mediums. While wireless and cable connectivity continues to hold sway, sometimes these methods do not meet the need of users. 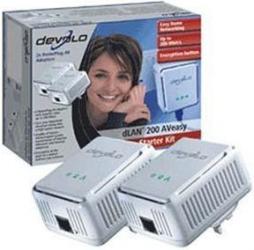 When setting up a home network you do need to consider which connectivity method is most appropriate for your particular circumstances.  If the though of laying cables from system to system located in various rooms does not appeal and your environment is not conducive to wireless connectivity or you are worried about security issues then a third alternative might appeal.  While this method does involve cables, the cables are those already in position fulfilling their primary concern of delivering electricity around the home.  This is the HomePlug concept whereby the mains power set up is used to transmit data between various devices.

Just over a couple of years ago I tool a look at an early implementation of the HomePlug technology with the devolo MicroLink dLAN Highspeed Starter Kit which consisted of two blue adapters, two Ethernet cables and a software CD.  Now it is the turn of the company’s dLAN 200 AVeasy Starter Kit which has a similar content although the adapters are now coloured white and are slightly larger with a different layout of the status LEDs.

As before, the setup involves plugging one of the adapters into a power socket and connecting it to an Ethernet socket on a computer.  You can install the supplied software which consists of various utilities and a configuration wizard.  The second adapter can be connected to another computer or appropriate device such as a modem, IP phone, set-top box or games console.  With any of these additional devices you will need to inform the main system of the relevant security ID 16-character code located on each of the HomePlug adapters.

This latest version of the HomePlug technology promises a data rate of up to 200Mbps.  However I was unable to achieve a data rate that approached close to this figure.  When using a variety of file types, including large videos, Word documents and JPEG images, data movement tended to average out at around 40Mbps.  The test computers were running Windows XP SP2 and were located in different rooms.  It was noticeable that when transferring three video files, the software tended to concentrate one file while the other two barely got a look in until the first file had been transferred.  Word documents and JPEG files were transferred almost too fast for Windows XP to display the relevant file names.

Rather than 56-bit encryption featured on the earlier version, this latest HomePlug product increased file encryption to 128-bit.  You should be aware that the encryption is only in effect while the data is being passed along the electronic circuit.

While there is a recommendation that this product’s connectivity should involve wall sockets, it will work when used on a gang socket although you might find that the bulky plugs block access to adjacent sockets.  This product is backward compatible with the HomePlug 1.0 implementation so those upgrading from that version can still use their existing adapters.

Included with this package are the same three utilities bundled with the earlier product.  EasyShare allows file sharing and chat capabilities to be carried out between stations.  Informer displays information about the dLAN devices while EasyClean offers to remove various files created by Internet Explorer.

The devolo dLAN 200 AVeasy Starter Kit can be used with Windows XP and later (including Vista 32/64-bit); Mac OS X; and Linux.  The Starter Kit should be available for around £105 with additional adapters priced at £53.48 each.  This product is supported by a three-year warranty,