Finally manufacturers seem to be releasing a good range of touch notebooks. As far as my tests are concerned this is the only real reason to upgrade to Windows 8. While I have reviewed large panels with touch why would you sit so close as to be able to use it. 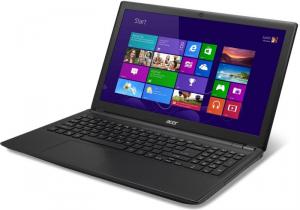 This is probably a desktop replacement as it weighs 2.43kilos. It can work on batteries in my tests I got over four hours with a good amount of Wi-Fi use. It is 38x24.5x2.5cm. The last figure the thickness is at the back this reduces to 1.5cm at the front. The viewable screen is 35x19.5cm which gives the notional diagonal imperial measurement of 15.6inches.

My unit was metallic grey around the keyboard and the back of the screen, the base was black as was the screen surround, the latter was very shiny and not good with direct sunlight on it and of course this and the screen do show finger marks.

The screen can go back to around 160 degrees, but to use touch around 60cm from the eyes at around 100 degrees worked for me. This is the comfortable extension of an arm while still in a position to type on the keyboard.

The 104 key keyboard has a 4cm strip behind it which has the Dolby Speakers and the on/off button in it. In front of the keyboard is a 10cm strip with the large 10.5x7.5cm trackpad mounted 8.5cm from the left and 18.5 cm from the right, some may find this a little far to the left for comfortable touch typing.

The right side has the DVD multi drive and a Kensington Lock port. The back is clear as the screen goes over it. The left side has DC input, screen out, HDMI out, one USB3 and two USB2 ports and a headset port. The front has an SD card port and two pin hole LEDs.

The thing most people will notice is a lack of an Ethernet port, while most will use Wireless, some places insist on no Wi-Fi so you would be cream crackered as you would if the Wireless chip stopped working.

However providing you have remembered to take the strange double headed adapter (provided) with you then you have both VGA out and Ethernet it fits into the screen out port.

It boots in 22seconds, shuts down in 4seconds, a full recharge takes two hours when off and I got 4hours 30minutes between charges when in heavy use.

Looking at the Acer site brings a be wielding number of models with a specification close to the model number that I was sent but none have exactly the same part number. The link given at the end is quite close but the processor is 1.8GHz against the 1.7GHz I was sent and that has 8GB of RAM and the unit I have has 6GB so in theory anyway somewhat more highly specified.

There is a turbo boost when required which ups the speed to over 2GHz and even the 6GB of RAM seemed to cope well with everything I asked it to do.

As far as software is concerned apart from Windows 8 64bit version you get the normal trial of anti-virus and security software, also a one month trial of Microsoft Office. I found a total of 24 Apps including one that tells you about the other Apps and also links you to Acer Tutorials.

I found the 50cm my eyes were from the 15.6inch Touchscreen just about meant my arms reached the screen comfortably to touch it and use the ten point touch ability. Any screen larger than this would I feel need someone to have either poor eye sight or very long arms.

The Windows Experience index always shows the slowest item of the five tested as the Experience but you need to look deeper when as here the scores are vastly different. Processor 6.9, Memory 7.4, Graphics 4.9, Gaming Graphics 6.3 and Hard Disc 5.9. So although the overall Windows Experience is 4.9 it’s more nippy than that.

The Acer V5-571P (with faster processor and more memory than the unit I was sent) is available from the link below for £489. The whole range of possible options are shown on the second link.