I requested to see this in the early summer, now shortly before Christmas after many delays it has arrived. I can see why a touchscreen notebook would be possible but unless short sighted I think reaching out to touch this screen puts it a little near. 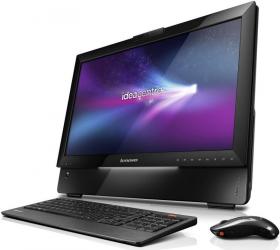 Behind the screen – in and around the support – are power input, two HDMI ports, Ethernet, SPDIF, A/V in, two lines of two USB ports and Co-Axiel socket. The rest of the connections are found on the sides of the screen.

These are two further USB ports, eSATA, multiple card slot, mini Firewire port, and external microphone and headphone sockets. The right side has the multi DVD drive. The top of the screen has a web cam built in.

The unit is supplied with both a wireless keyboard and wireless mouse that should sync with the unit meaning you could sit further away.

Under the screen on the right side of the bottom are a range of touch buttons while the left area has three LEDs. Below this on the stand support is a pair of inbuilt speakers that give a perfectly good sound with plenty of volume.

The startup time is not spectacular at 50seconds but the shutdown time is far more acceptable at only 10seconds.

The software supplied is Windows 7 Home Premium, the Office 2010 Starter edition (Word and Excel with adverts), various Lenovo applets, InterVideo Win DVD and a McAfee trial all installed ready for you to implement.

Windows Experience figures are quite balanced, going from Hard Disc and Memory at 5.9 to Processor at 6.8. The other items are Graphics and Gaming Graphics both at 6.7, making this a well thought out combination.

Apart from a standard PC this is also a Windows Media Centre (yes you do get a remote control) and I found the TV part easy to use and record. The TV setup takes around twenty minutes but even running with a fly lead from the pass through of a Philips/Pace Digital unit I am currently reviewing the pictures are recordings were excellent either in a window or full screen. This must be down to the quality of the components in the inbuilt TV Tuner.

As stated I would have been happier with arms a foot or so longer to really make use of the touchscreen but as an ‘All In One’ unit it was excellent. After recently reviewing a couple of Netboooks you really notice the speed of a full processor with lots of memory and of course the larger screen size does give a larger display area.

The processor is an Intel Core i5 (M450) 2.4GHz, you have 4GB RAM a 64bit operating system and the two touch point system on the screen all making this a speedy system. However as with the previous such unit I reviewed earlier this year I wonder exactly what it is. Is it a standard PC, is it a Media Centre or is it a Touchscreen unit. In essence it is all three but unless you are short sighted or have long arms how does it mesh together.

Doing my Internet searches found the Lenovo Home (Idea) Centre A700 at £954.92 from the first link below. Not a perfect match as the model on the link has a 2.26GHz processor against the 2.4GHz I was sent, but apart from that it seems the same.